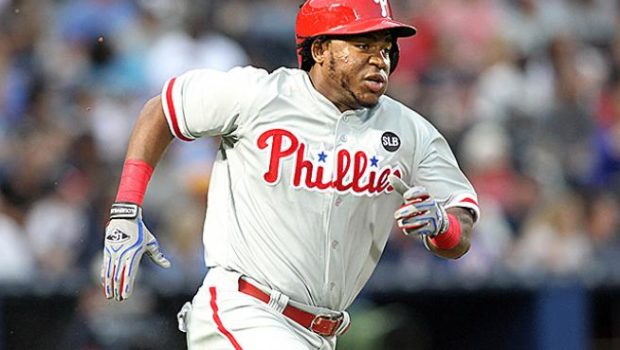 PHILLIES’ FRANCO, HERRERA NEED TO GET GOING AGAINST BREW CREW!

Now that the Phillies have fallen back to earth after lighting up the sky during this season’s first 40 games, the Milwaukee Brewers may be just what thew doctor ordered.

Odubel Herrera and Maikel Franco (above) are among the scuffling Phillies, though they might be able to find their stroke against the Brew Crew.

The Phillies look to avoid their seventh straight loss overall and eighth in a row at home in tonight’s opener of this four-game set.

Philly’s rotation led the way with a 3.72 ERA as the rebuilding club won 24 of its first 41 games. The starters, however, haven’t been able to carry the load while the Phillies have averaged just 2.5 runs, batted .223 and struck out 102 times during an ensuing 2-10 stretch.

Tyler Goeddel’s seventh-inning homer accounted for the only runs as Philadelphia (26-27) fanned 12 times in Wednesday’s 7-2 home loss to Washington that dropped it below .500 for the first time since April 24.

”We know where we need to go. We’re not there yet,” manager Pete Mackanin said.

Now they hope to get back on track and lead a resurgence against a Milwaukee pitching staff they’ve battered. Herrera’s .424 average in nine games against Milwaukee is his highest versus any NL opponent, including 5 for 12 with a homer from April 22-24 when the Phillies took two of three at Miller Park. Franco was 7 for 13 with three homers and eight RBIs in that series.

The right-hander hasn’t fared well versus Philadelphia, going 0-2 with a 7.53 ERA in three starts.

Milwaukee is coming off a 3-3 homestand which concluded with a 3-1 win over St. Louis on Wednesday.

“We had some tough losses, so it was good to finish out the series with a win and not get swept,” pitcher Zach Davis told MLB’s official website.

Ryan Braun went 2 for 4 with an RBI on Wednesday. He’s homered in three of his last four versus Philadelphia and is batting .473 with nine long balls in his past 22 at Citizens Bank Park.

They’ll try to continue that run against Jerad Eickhoff, who allowed a season-high seven runs over 5 1/3 innings in an 8-5 loss at Milwaukee (24-29) on April 24. That was also part of his personal five-game slide.

Eickhoff (2-7, 4.07) surrendered more than three earned runs for only the second time in 10 starts in Saturday’s 4-1 loss at Wrigley Field.