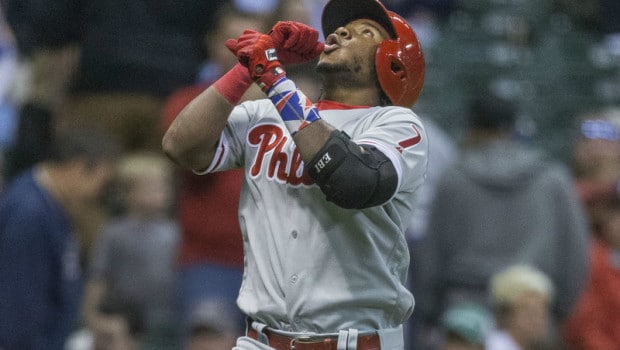 The Phillies got two star performances from their young studs last night in Milwaukee.

Maikel Franco (above) homered twice and Aaron Nola pitched a seven-inning gem in the Phillies’ 5-2 win over the Brewers last night at Miller Park.

Nola retired 11 consecutive batters from the second inning to the sixth and earned his first victory of the season by holding the Brewers to one run on four hits with seven strikeouts. With 30 strikeouts this season, Nola is tied with Clayton Kershaw for the National League lead, trailing only Boston’s David Price (32) in the Majors.

“I was a little concerned in the first inning,” Phillies manager Pete Mackanin said. “Nola looked a little shaky at first, then he settled down. He started pitching inside a little more, which made a big difference for him.”

The Phillies erased a 1-0 deficit with Darin Ruf’s shift-beating single in the fourth inning against Brewers starter Zach Davies, then took the lead with a three-run fifth.Freddy Galvis hit a go-ahead RBI triple before Franco connected against Davies for a two-run home run. Franco homered again in the seventh off Chris Capuano, a 426-footer that left his bat at 105 mph, according to Statcast™.

Franco stepped into the batter’s box in the fifth inning in a 4-for-32 slump. But he hit a 1-0 curveball from Davies over the left-field wall for a two-run homer to make it 4-1, and he hit a solo homer to left-center against Capuano in the seventh to make it 5-1. They were Franco’s third and fourth homers of the season, and the second multi-homer game of his career.

“I’ve been in a tough slump,” Franco said. “I know it’s going to happen. Every single day you’re not going to feel good. When you’re in a tough moment like that, you have to stay positive and continue to work hard.” More >

Nola allowed a career-high seven runs in his last start Saturday against the Nationals. But after he allowed a run in the first inning to the Brewers, he settled. Nola allowed four hits, one run, two walks and struck out seven in seven innings. After he allowed a two-out single to Domingo Santana in the second, he retired 16 of the final 17 batters he faced.