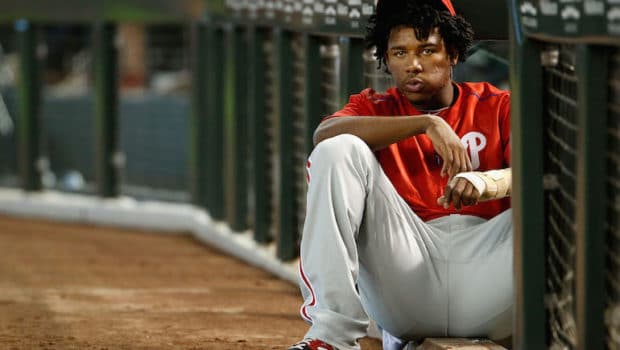 PHILLIES FRANCO’S BACK TIGHTNESS MAY KEEP HIM OUT TONIGHT!

The Phillies’ red-hot Mikail Franco has lower back tightness after slipping on first base last night and leaving the Phillies’ 8-6 loss to the Nationals.

If Franco has to sit tonight at home against the Yankees, the Phillies might switch around their infield, since J.P. Crawford is on the disabled list (broken left hand) and Jesmuel Valentin is on paternity leave.

However, they could just replace Franco with Mitch Walding, who took over last night.

He has eight career at-bats and one career start, his big league debut on May 30. Franco is hitting .256 with with nine home runs and had been especially hot lately, going 4-for-4 on Saturday.