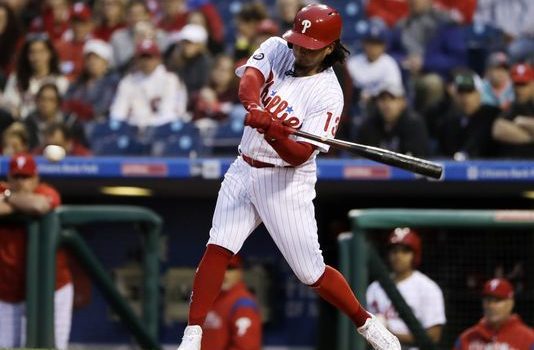 The Phillies picked up 11 hits and four runs in seven innings against Bartolo Colon last night in a 4-3 victory over the Braves.

Colon had been 10-3 with a 3.01 ERA in 14 starts against the Phillies the previous three seasons with the Mets. The Phillies had picked up more than six hits against him in just four of those 14 starts. They had never had more than 10, which happened once, in July 2014.

“You know what you’re going to get from him,” Phillies left fielder Aaron Altherr said. “He’s always going to throw that little running fastball and the sinker. You’ve just got to be ready to hit when it’s a strike. He throws a lot of those.”

“To their credit, they were getting hits off of me and fortunately for me, a lot of those hits didn’t necessarily turn into runs,” Colon said through an interpreter. “So, I’m grateful that even though they got a lot of hits, we kind of contained them. I definitely wouldn’t say I had any bad luck.”

Phillies right-hander Jeremy Hellickson (3-0, 1.88 ERA) had another strong start. He allowed three hits, two runs and struck out five in seven innings. He has pitched seven or more innings in back-to-back starts.

The victory snapped the Phillies’ seven-game losing streak to the Braves, which dated to July 31. Atlanta has lost four straight since bouncing back from a 1-6 start with five straight wins.

“I feel like we’re just a tick away from something really good happening,” Braves manager Brian Snitker said. “It’s one of those things where we’ve just got to keep playing. I don’t think we’re that far off.”