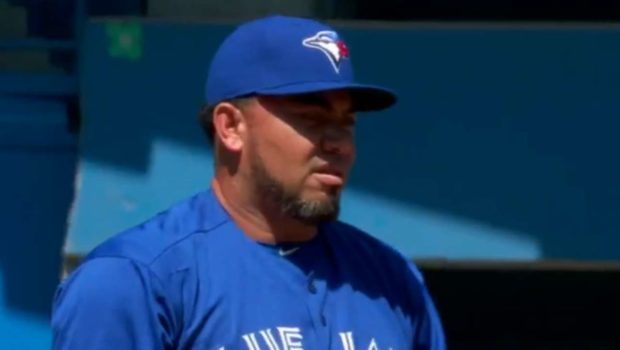 PHILLIES ON THE FENCE: TRADE FOR BATS OR MAKE ROSTER ROOM FOR PROSPECTS

The Phillies are expected to announce today they have signed right-handed reliever Joaquin Benoit to a one-year contract.

The Phillies are officially on the fence at this week’s winter meetings in Maryland.

They have been linked lately to Andrew McCutchen, J.D. Martinez, Jay Bruce and Curtis Granderson, who are available in trades. But the Phillies also need to provide their prospects the opportunity to prove themselves in 2017.

“That topic is the one that we have spent the most time discussing, not just here, but this offseason, about striking the right balance between adding a veteran bat or veteran free agent to this team to make our team better,” Phillies general manager Matt Klentak told MLB.com yesterday, “but again, not taking playing time away from players that need the playing time. … We are continuing to talk about trade acquisitions and talk to agents for free agents to see if the right opportunity exists to blend all those factors together, but what we do not want to do is bring in so many veterans that we are denying opportunities to our young players.”

McCutchen, Martinez, Bruce and Granderson are outfielders. The Phillies acquired Howie Kendrick last month in a trade with the Dodgers. Klentak said Kendrick will be the team’s everyday left fielder. Odubel Herrera is the center fielder, leaving Roman Quinn, Aaron Altherr and other younger players to play in right field.

Obviously, if the Phillies would acquire somebody like Martinez or Bruce they would lose the ability to learn as much as possible about Quinn, Altherr, etc., unless they make a corresponding move. Klentak indicated there are no serious trade talks brewing like last Winter Meetings, when they traded Ken Giles to the Astros.

“I would say there’s nothing nearly as active on that front today as there was a year ago at this time with Giles,” Klentak said. “However, I’ll say, and I view this as a good thing organizationally, there is genuine interest in a lot of our players, especially on the pitching side right now.

“Because we added as many players to the roster as we did, we have a lot of volume of starting pitching, particularly at the big league, Triple-A and Double-A levels, and teams have noticed that and are asking us about that to see if there’s a swap that might make sense for both parties. Those are the type of inquiries that we explore, particularly in a setting like this, where everybody’s together in one place and we just see what comes of it.”

The Phillies are expected to announce today they have signed right-handed reliever Joaquin Benoit to a one-year contract. If the Phillies focus on more minor acquisitions the remainder of the offseason, meaning they do not acquire a veteran bat, they will be looking to acquire more depth at multiple positions.

But they do need a utility infielder that can play both shortstop and second base.Andres Blanco remains a free agent.

“That could come in the form of a Major League acquisition,” Klentak said. “That could come in the form of [non-roster invitees] and depth-type pieces. That’s one of the things we’ve been working on, both last night and today in some of our meetings with agents, not only the more well-known names on the free-agent market, but also players to come in and add some depth and compete for jobs in Spring Training, in the infield, in the bullpen, behind the plate, guys like that.”

Klentak said he does not believe the Phillies need a veteran backup catcher. A.J. Ellis’ return has been mentioned as a possibility.

“If it works out, we’re open minded to that,” Klentak said. “But Andrew Knapp just finished his age-25 season in Triple-A. He has a full year of at-bats in Triple-A. At some point for both he and [Jorge Alfaro], we’re going to have to find out what those guys can do at the big league level. During the 2017 season, we’ll have to find out — not just about those two guys — but others.”