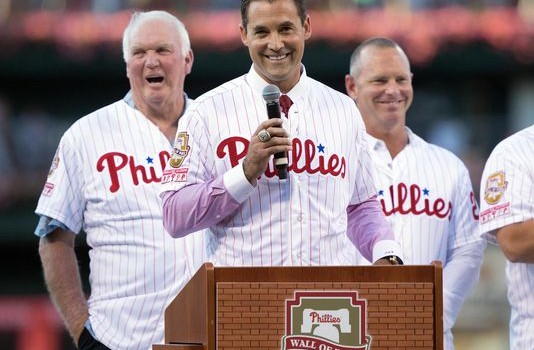 PHILLIES FANS SHOW PAT BURRELL THAT THEY LOVE HIM BACK!

Home is the conquering hero, and the hometown fans last night at the Bank hailed him.

Pat Burrell mocked his closest friends. He picked on his former managers, juxtaposing the even-keeled Charlie Manuel against the quick-tempered Larry Bowa. He even joked about the sometimes fractured relationship between him and the media.

The first pick of the 1998 MLB draft, Burrell finished his career with 251 home runs as a Phillie, fourth all time only behind Mike Schmidt, Del Ennis and former teammate Ryan Howard.

Despite his high ranks on the all-time Phillies offensive leaderboard and the instrumental role he played in the 2008 postseason, not limited to driving in the winning run of the World Series, Burrell doesn’t see himself as belonging in the company he just joined.

“I was here for a long time and every year they put a new name up there: Steve Carlton, Mike Schmidt and all these guys,” Burrell said. “You just never think that you’re in the same group as them. To be in that group is a huge honor.”

Many members of the group Burrell is honored to join were in attendance Friday night as Carlton, Schmidt, Bowa, Manuel, Jim Bunning and more were in attendance to help usher him into the Wall of Fame. Jason Michaels and former teammate Nick Punto, his close friends and roommates from his early playing days, both attended as well, having the honors of revealing his plaque.

Pre-taped messages from Royals legend George Brett and former Giants third-base coach Tim Flannery were also showed in honor of Burrell, with the latter of which memorializing Burrell’s bond with John Vukovich. After those messages, Vukovich’s three granddaughters, along with Chase Utley, came out to award Burrell with a miniature version of his plaque.

Burrell also thanked the San Francisco Giants, the organization that hired him to be a scout after he retired. Recently however, Burrell stepped away from scouting, saying he had grown tired of the grind of travelling and said he “needed some time to figure out what [he was] doing.”

As many unknowns as there are surrounding Burrell’s future, there are far less surrounding the future of the Phillies Wall of Fame. Many of Burrell’s former teammates will undoubtedly join him on the wall someday. And when asked what it meant to be the first of the group to be inducted, Burrell scoffed at the idea of first meaning anything other than age.

“I’m just the first guy to retire,” Burrell said. “You have to wait four years. I don’t think I’d be the first choice if all those guys retired the same time I did.”