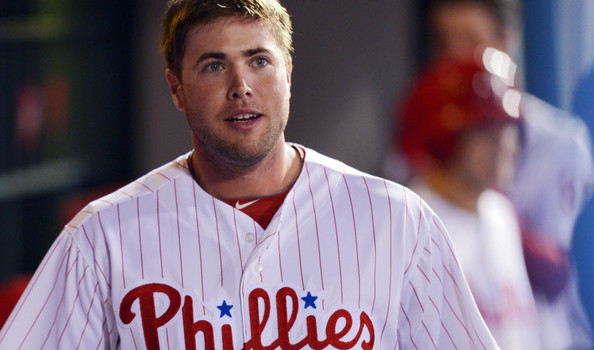 PHILLIES FANS ARE WAVING THE LONG GOOD-BYE TO DARIN RUF

Phillies fans are watching the longest, saddest good-bye of any player in recent memory:

That of star-crossed Darin Ruf.

The Phillies are not scheduled to face a lefty starter for the rest of the season, so yesterday’s game against the Mets might Ruf’s last in a Phillies uniform, especially considering manager Pete Mackanin’s intention to give Ryan Howard more playing time down the stretch.

“It seemed like we never faced a lefty for the first month of the season. So that didn’t help Ruf at the time,” Mackanin said. “Joseph entered the picture and made an immediate impression.”

Ruf’s departure from the majors set the stage for Joseph’s immediate emergence. At the time of his May 13 demotion to AAA Lehigh Valley – and Joseph’s promotion — Ruf was had a .158/.206/.193 slash line.

Since his Sept. 1 return to the majors after rosters expanded, Ruf has done what he can to make sure his possible final season in a Phillies uniform ends on a high note. On Friday night, he drilled a home run to left center off Mets reliever Josh Smoker in pinch-hit duty, the first time Ruf had gone yard since Oct. 1, 2015.

“It felt good,” Ruf said about ending his home run drought. “You just try to simply things and last night it worked out for me.”

Where Ruf will be next year is a more complicated matter, as the 30-year-old is out of minor league options. Japanese scouts were spotted at the games he played for AAA Lehigh Valley.

With Lehigh Valley, Ruf received an opportunity he’s never truly been able to get with the Phillies due to the longstanding presence of Howard: a chance to play every day and consistently accumulate plate appearances. He hit .294/.356/.529 in 390 trips to the plate for the IronPigs.

Ruf has never made more than 300 plate appearances in a major league season and would struggle to crack that number if he remains in Philly as a backup to Joseph, who will still be 25 on opening day next year.

“I learned [this year] that you can’t take anything for granted in this game,” Ruf said. “You’ve just got to keep working to get better every day, got to put up numbers no matter where you’re at in order to get to where you want.