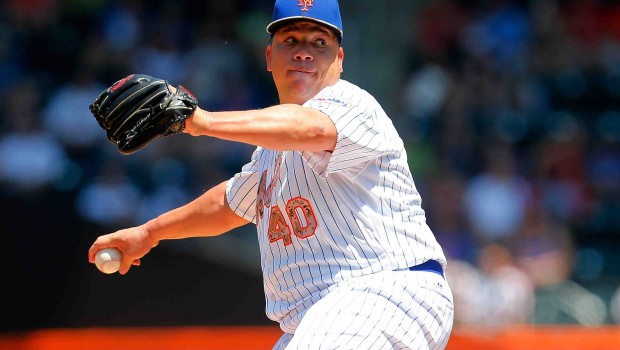 The Phillies, who had won six straight games in the past week and a half, have now dropped five of their last seven.

And, wouldn’t you know it, Monday’s loss was to the New York Mets, who certainly have the Phillies’ number.

Wilmer Flores hit a tie-breaking three-run homer off Justin De Fratus in the sixth inning to help Bartolo Colon (above) and the New York Mets beat the Phillies 6-3.

With the score 3-all, Daniel Murphy led off the sixth with a single off Elvis Araujo (1-1), De Fratus walked Michael Cuddyer and Flores homered off the original 16-foot left-field wall, over the 8-foot blue fence erected in front of it for the 2012 season.

Jeurys Familia pitched the ninth for his 14th save in 15 chances, completing the Mets’ 18th win in their last 23 games against the Phillies.

New York, which had lost five of its previous six games, improved to 18-6 at home this season. Collins held a rare in-season team meeting after Sunday’s defeat in Pittsburgh.

“This isn’t football. You give more than one speech a month, they’re going to turn you off,” he said.

The Phils have dropped five of seven following a season-best six-game winning streak.

Gonzalez (2-2), in the Phillies’ rotation following injuries to Chad Billingsley and David Buchanan, struck out a career-high eight in 4 1-3 innings. He allowed three runs and six hits.

Utley’s two-run single put the Phillies ahead in the third, but Lucas Duda tied it in the bottom half with a home run into the bridge seats in right-center.

New York’s Michael Cuddyer homered into the second deck in left in the fourth, and Ryan Howard’s sacrifice fly tied it in the fifth. Howard earlier had a rare opposite-field hit to left off the end of his bat and through the opening in the shifted infield.