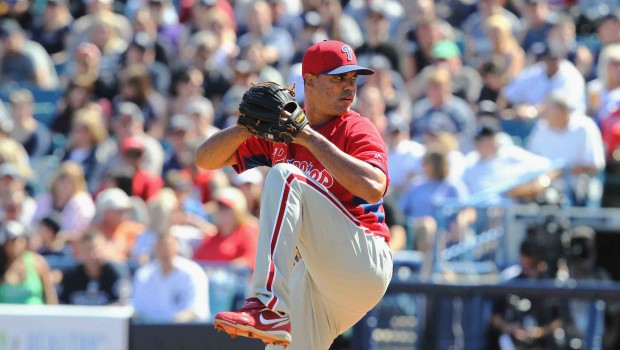 The Phillies lost to the Atlanta Braves 7-4 yesterday at Turner Field, but the real news is that the team has finally given up trying to win in 2014 — most folks think this should have happened two months ago — and are assessing their prospects for 2015.

Maikel Franco, the organization’s No. 3 prospect and right-hander Miguel Alfredo Gonzalez, whom they signed to a three-year, $12 million contract last summer.

Maikel Franco made his debut Tuesday and Miguel Alfredo Gonzalez replaced injured left-hander Mario Hollands with runners at the corners and two outs in the fifth inning. He allowed the go-ahead run to score in the fifth and two more runs to score in the sixth as the Braves finally put runs on the board against the Phillies following a no-hit loss Monday and a shutout loss Tuesday.

“He looked good today, he was just rushing a little bit — you know, first outing, a little bit nervous and jumpy,” Phillies catcher Wil Nieves said. “But he made some good pitches when he stayed back. That’s how he pitched [in the Minors]. I told him, ‘Don’t worry, first outing, relax next time and just do what you do.'”

Gonzalez has been a mystery ever since the Phils signed last summer. They originally agreed to a six-year, $48 million contract with an $11 million club option for 2019 before concerns about his arm following a medical exam made the Phillies renegotiate the deal. But upon the agreement, the Phillies touted Gonzalez as a bona fide starter.

But Gonzalez wasn’t healthy in spring training, and knowing they lacked depth in the rotation, the Phillies signed A.J. Burnett to a one-year, $16 million contract with a player option next season worth as much as $12.75 million.

Gonzalez opened the season on the disabled list with right shoulder tendinitis. He made three starts with Class A Advanced Clearwater in May before the Phillies decided to move him to the bullpen because they believed he would hold up better physically. He posted a 3.11 ERA in 31 appearances between Clearwater, Double-A Reading and Triple-A Lehigh Valley before his promotion to the big leagues Tuesday.

Gonzalez opened his outing in the fifth by allowing a single to right to Christian Bethancourt to allow the go-ahead run to score to make it 5-4. He then walked B.J. Upton to load the bases before striking out Braves pitcher Ervin Santana to end the inning.

Gonzalez retired the first two batters he faced in the sixth inning before he walked Freddie Freeman and allowed back-to-back singles to Ryan Doumit and Tommy La Stella, which scored Freeman to make it 6-4.

“Well, he’s come a long way since spring training,” Phillies manager Ryne Sandberg said. “That’s one thing. He looks like he’s healthy, looks like he’s throwing good. So that’s something he can build on, being healthy and having this experience to pitch. Potentially, yeah, a very good arm.”

Gonzalez will get more opportunities to pitch this month. This is just a start. But one wonders what his future holds. Will he remain in the bullpen or return to the rotation?

“I feel strong,” he said. “If I start next year, I’ll be fine. … The Phillies made the decision to make me a reliever to see if I could get healthy and confident again. The decision to be a starter, it’s up to them.”