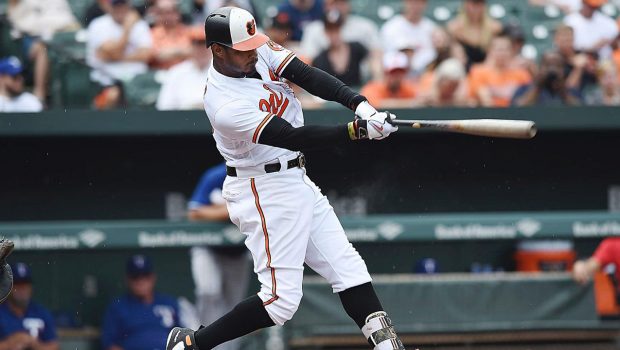 The Phillies and Indians have emerged as two of the most serious contenders to acquire five-time All-Star center fielder Adam Jones from the Orioles, sources told MLB.com.

Jones has full no-trade rights, and his desire to play in Philly, Cleveland or any other destination for the rest of this year remains unknown.

However, given Jones’ competitiveness and desire to win a championship, it’s very possible he will accept a trade to the strongest World Series contender among the options presented to him. Jones is due to become a free agent after this season, so any trade approval would be for the short term.

Jones, who turns 33 on Aug. 1, already has had an extraordinary career, including four Gold Glove Awards, three postseason appearances with the Orioles and a 2017 World Baseball Classic gold medal as the unofficial captain of Team USA. But he has yet to appear in a World Series game, reaching as far as the 2014 American League Championship Series.

Jones remains a league-average hitter by adjusted OPS. That level of production would bring much-needed improvement to the Indians, who rank 28th in the Majors with a .571 OPS in center field this year. And although defensive metrics rate Jones as a below-average center fielder this season, his performance should improve with better pre-pitch positioning on a more analytically inclined team.

The Phillies, meanwhile, likely would utilize Jones in right field, where the team’s combined .640 OPS is fourth-worst in the Majors.

Jones has been traded only once before as a professional, from the Mariners to the Orioles in February 2008. Andy MacPhail was the Baltimore general manager at the time. He is president of the Phillies now.