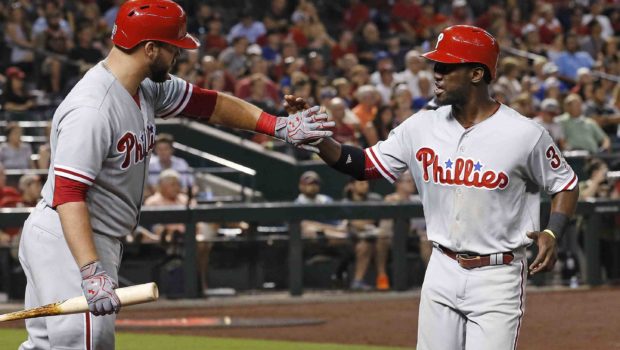 The Phillies offense, which came to life in San Francisco, was on full throttle last night in Arizona.

They pounded out 16 hits in an 8-0 win. Maikel Franco had three RBIs, Cesar Hernandez drove in a pair of runs, and Odubel Herrera (above right) collected four hits at the top of the order.

“This whole road trip, starting in Minnesota, then in San Francisco, we’ve been swinging the bats very well, which is very nice to see,” Phillies manager Pete Mackanin said. “It was a good game for us all the way around.”

Vince Velasquez (6-2) picked up the win in his first start off the disabled list, as the Phillies won for the third time in five games, but for just the fourth time in their past 19. He struck out seven over five innings.

D-backs starter Robbie Ray (4-7) lost for the second straight start, allowing four earned runs on nine hits in six-plus innings. Arizona was shut out for the fourth time this season and fell to 13-26 at Chase Field — the second-worst home record in the Majors.

“They just beat us tonight,” D-backs outfielder Michael Bourn said. “No way around it. We’ll be back tomorrow, though.”

After five scoreless innings, the Phillies pieced together a pair of runs in the top of the sixth. Herrera and Peter Bourjos started the inning with consecutive singles, advancing to second and third on a wild pitch. Franco and Cameron Rupp drove them in with back-to-back RBI singles for a 2-0 lead.

“We started off slow against Ray, he’s got good stuff, and got to him a bit there,” Mackanin said. “It’s nice to see the offense coming around, which will hopefully help us turn the corner.”