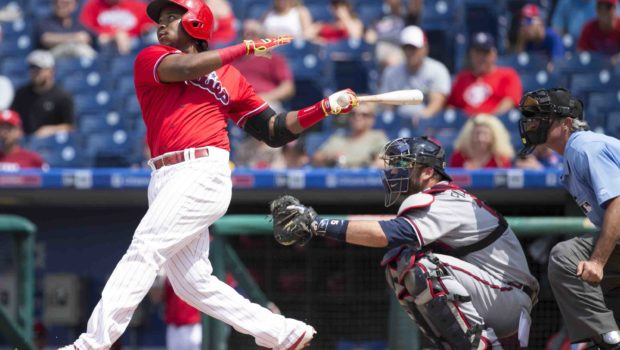 The Phillies batted around in the bottom of the seventh, scoring six runs, for a 7-4 comeback win against the split-squad Braves in Clearwater yesterday.

Maikel Franco’s (above) first-inning RBI single gave the Phillies a 1-0 lead, but they trailed, 4-1, before their seventh-inning outburst.

All the scoring started after there were two outs and nobody on. After Chris Coghlan doubled to tie the score and knock reliever Michael Mader out of the game, David Hale came in and walked Hector Gomez. Andrew Knapp doubled to put the Phillies ahead, and Dylan Cozens singled to drive in the final two runs of the inning.

Christian Walker opened the rally with a leadoff homer to left-center off Eickhoff, who led the Phils rotation in starts (33) and earned run average (3.65) last season. Balbino Fuenmayor followed with a double to the gap in right-center.

Emilio Bonifacio sacrificed Fuenmayor to third. Eickhoff struck out Micah Johnson and was one out away from limiting the damage. But David Freitas doubled to drive in Fuenmayor and then scored himself after Eickhoff overthrew first after fielding Travis Demeritte’s comebacker.

Eickhoff retired the side in order in the first and third.

“I think it just came down to that I executed in the first inning, didn’t in the second and then executed again in the third,” he said. “So I’ve just got to maintain that focus and maintain that rhythm throughout.”

Braves third baseman Rio Ruiz hit his first Grapefruit League homer of the year offDrew Anderson with one out in the sixth.

Braves starter Aaron Blair was knocked out of the game when the Phillies’ first batter, Cesar Hernandez, reached on a sharp one-hopper back to the mound that caromed off his non-pitching left hand. Blair is listed as day to day.