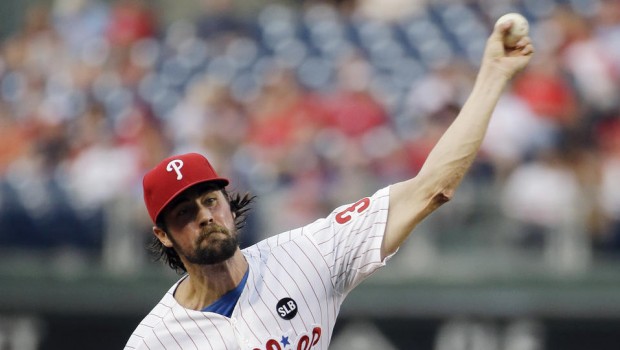 The Phillies danced with the baseball gods last night.

Bettis retired the first 18 batters and took a no-hitter into the eighth inning,Troy Tulowitzki hit two solo homers and the Colorado Rockies beat the Phillies 4-1 at Citizens Bank Park..

Cody Asche singled through a shift to end Bettis’ no-hit bid with one out in the eighth. Bettis (2-0) lost a perfect game in the seventh when shortstop Tulowitzki made an error on Ben Revere’s grounder up the middle.

”Initially, I thought it was right at Tulo,” Bettis said of Asche’s hit. ”I turned around and looked and I was like, ‘Oh, man!’ But there’s nothing you can do about that. That’s baseball.”

Colorado center fielder Charlie Blackmon made a sliding catch to rob Freddy Galvis of a hit after Revere’s grounder went through Tulowitzki’s legs leading off the bottom of the seventh. But Asche hit a sharp grounder that would have been a routine play for Tulowitzki except the two-time Gold Glove winner was shifted to the right-field side of second base.

”I align the defense,” Rockies manager Walt Weiss said. ”I felt we stole some outs with the shift. We’re playing the percentages.”

The 26-year-old Bettis allowed two hits and tied a career-high with seven strikeouts in eight innings in his 12th start in the majors.

Tulowitzki had two homers in 154 at-bats this season before going deep his first two times up against Cole Hamels (5-4). Ben Paulsen hit a two-run homer for the Rockies, who won for the fifth time in six games.

”I haven’t started off the way I envisioned, but today is why I play,” said Tulowitzki, who finished 4 for 4.

Hamels had won his last four starts. The Phillies have lost five straight.

”He can definitely carry a team,” Hamels said of Tulowitzki. ”He showed why he’s a great hitter.”

Bettis took a shutout into the ninth in an 11-2 victory over San Francisco in his previous start last Sunday. The right-hander is 3-5 with a 5.77 ERA in 41 career appearances.

”He was coming off his best outing and he topped it,” Weiss said.

The Phillies scored a run off closer John Axford in the ninth when left fielder Brandon Barnes made an error on Chase Utley’s deep fly to the wall, allowing Revere to score from second after he reached on a wild pitch while striking out.