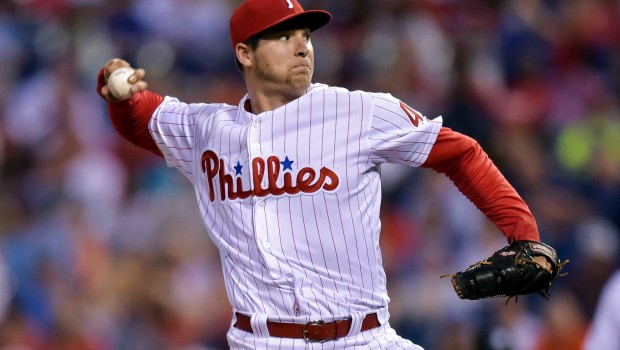 Even on a night when the defending NL champ New York Mets took them out 5-2, the Phillies could smile about Jared Eickhoff.

The Phillies’ righthander hurled seven innings and allowed five hits, two runs, three walks and struck out nine on a night when he had little margin for error.

While the Phillies may lack the firepower to compete with the Mets in 2016, it is not a stretch to think Eickhoff, Vince Velasquez and Aaron Nola could be battling the Mets’ young stud pitchers with much more on the line in the future.

“Without a doubt,” Phillies manager Pete Mackanin said. “I like what I see from them. They’ve got a real good presence on the mound. That’s one concern we don’t have.”

Eickhoff is 1-4 in five career starts with the Mets, but the Phillies have scored just four runs when he has been on the mound in those games. He also has a 2.81 ERA in those starts, striking out 32 batters in 32 innings.

“The guy is a bulldog out there,” Phillies catcher Cameron Rupp said. “He’s just as tough as any guy on any roster. He’s going to go out there, he’s going to compete. He knows how to work, he knows how to pitch. He’s got No. 1 kind of stuff, and he’s shown it.”

Eickhoff allowed a home run to David Wright in the first inning to hand the Mets a 1-0 lead. He had retired 11 consecutive batters when Yoenis Cespedes hit a two-out triple and scored on Lucas Duda’s double to left field to make it 2-1 in the sixth.

Phillies left fielder David Lough had a chance to catch it, but the ball deflected off the top of his glove as he dived for it.

But Eickhoff showed some fight in the seventh. He allowed a leadoff single to Asdrubal Cabrera and a one-out walk to Syndergaard but settled down to strike out Curtis Granderson on a 1-2 curveball and Wright on a 2-2 curveball to end the inning.

“He really gritted his teeth and went after him,” Mackanin said. “That was a good test.”

Eickhoff punched his mitt as he walked off the mound.

“I was really excited to get out of that,” he said.

Eickhoff has made just 11 starts in his big league career, but he is establishing himself as a key piece of the Phillies’ future. Since he allowed six runs in four innings against the Red Sox in Boston on Sept. 6, 2015, Eickhoff is 3-2 with a 1.34 ERA in seven starts.

He said he is not thinking about what could be in the future between the Phillies and Mets.

Velasquez is another big piece of the Phillies’ future. He faces the Mets on Tuesday night.