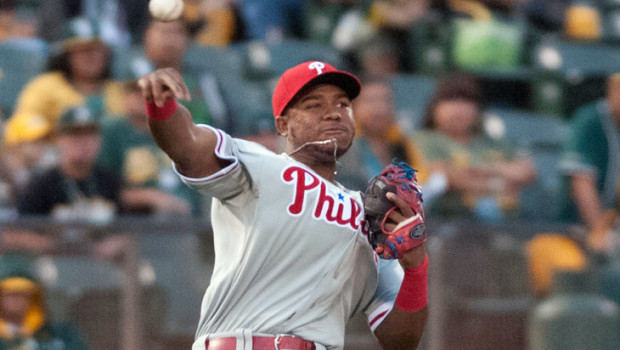 PHILLIES DROP ASCHE TO MINORS; FRANCO WILL BE HERE SOON

One door closes. One door opens.

In life as it is in baseball.

Even for the woeful Phillies.

Cody Asche is being sent down to Lehigh Valley and Maikel Franco (above) should be coming up to replace him very soon.

“He’s getting closer and closer,” Phillies general manager Ruben Amaro Jr. said Monday afternoon at Citizens Bank Park. “We just want to make sure he’s ready to be a big leaguer for a long time when we bring him to the big leagues.”

The Phillies optioned Asche to Triple-A following Monday’s 4-3 loss to the Pirates. Asche has been the team’s everyday third baseman since last season, but in Triple-A, he will begin his transition into a full-time left fielder.

Franco will not be promoted any earlier than Friday, which means Cesar Hernandez and Andres Blanco will man third base through Thursday. If Franco remains in the minor leagues 40 days — the 40th day is Thursday — the Phillies can push Franco’s free agency from 2020 to 2021.

That is a critical consideration for a rebuilding team. After all, it makes little sense to cost themselves one year of team control over Franco for a couple extra weeks in a rebuilding season.

Not only is Franco hitting well, but he also continues to play stellar defense at third base.

Amaro said the Phillies expect Franco to get the “bulk” of his playing time at third base upon his arrival. Franco also can play first base.

“The beauty of him is he can play the other position, so if we need him to do that too, he could do that,” Amaro said. “But we don’t want to bring him until we’re sure it’s time for him to come. He got his feet wet a little last year. I think that was good to get an understanding for what it’s like to be in the big leagues and have a little bit of a precursor. The next time we bring him to the big leagues, it should be for good, we hope. That will be up to him. But that’s the hope.”

Once Asche moves to left field, Ben Revere is expected to move to right. Of course, what happens if Triple-A outfielder Domonic Brown is promoted? The Phillies optioned him late last month, despite a $2.5 million salary.

“Those are decisions we still have to make, and as always, those things have a way of working themselves out,” Amaro said.