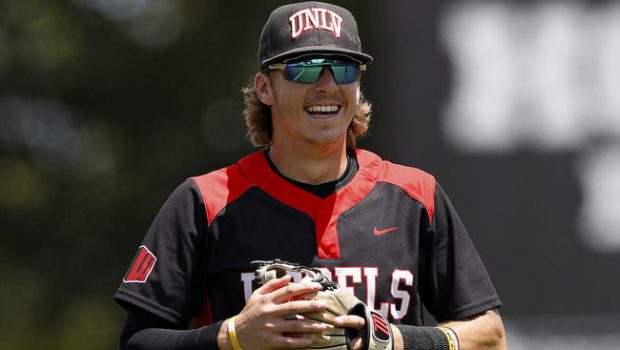 After being selected last night by the Phillies with the 14th overall MLB draft pick, Bryson Stott — a junior shortstop at UNLV — is now hoping to one day become Bryce Harper’s teammate.

The pair have a bond that extends well beyond a shared hometown. Harper’s sister was a cheerleader on a team coached by Stott’s mom, Shana, in high school. As Bryson got older, he formed a relationship of his own with Harper, the No. 1 overall pick in the 2010 Draft.

“He always told me just to have fun,” Stott said of Harper’s advice along the way. “He says when you have fun, everything is going to come your way. Just being able to watch him and what he does on that stage, and how he works in the offseason and during the season, is a really helpful thing for me.”

Stott has had an impressive career of his own to this point, one that led to him hearing his name called on TV as a first-round pick on Monday.

“It was awesome,” he said. “You dream of that as a kid. I watched it at home with my family and some of my best friends. Just to be able to hear my name — and breathe again — was pretty awesome.”

“We’ve got a polished young player here who has outstanding makeup,” amateur scouting director Johnny Almaraz said. “I met with him in the winter for about an hour and loved everything about him. I was very, very happy to get him.”

The 21-year-old infielder is a 2019 semifinalist for the Golden Spikes Award, given annually by USA Baseball to the top amateur baseball player in the U.S. He is also a semifinalist for the Brooks Wallace Award for the nation’s top collegiate shortstop, an award previously won by Major Leaguers like Alex Bregman, Trea Turner and Dansby Swanson.

Given Stott’s impressive performance not only at the collegiate level, but also as a member of the USA Collegiate National Team last summer, the Phillies are hopeful that he can work his way through the Minors quicker than the average first-round pick.

“He’s an advanced player,” Almaraz said. “We feel that he’s going to have a very favorable timeline as far as getting to the big leagues is concerned. We think he’s going to fit into our system and do what he needs to do, both offensively and defensively.”

As for the first part of that equation, Stott has a high contact rate and impressive plate discipline. He hits the ball well to both gaps, but also has some power pulling the ball.

“I think my best attribute is my offensive game,” said Stott, who had 55 walks and struck out just 39 times this season. “I love hitting, I love running the bases. So just being able to do that, and keep swinging it how I have been, is what I look forward to.”

That’s not to say his defensive game is lacking by any means. In fact, Almaraz said Stott has the versatility to play second or third base, though he also called him a “potential frontline shortstop for the future.”

Stott is confident he can do what it takes to stick at shortstop as he works his way through the Phillies’ system.

“I think I can stay there. I think I can move well enough,” Stott said. “You can always improve your quickness and your lateral movements, your angles to balls. So just being able to work on that, and continue to get better in all aspects.”