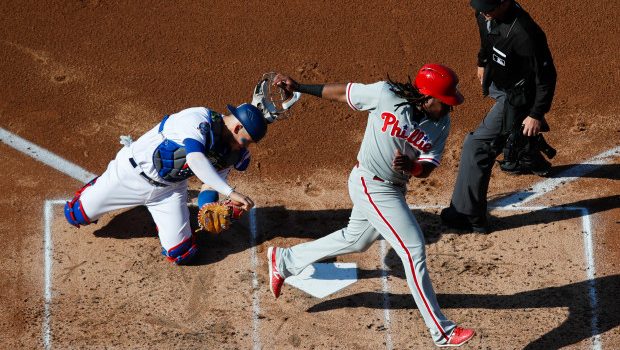 The Phillies set atop the NL East with a three-game lead over the Atlanta Braves.

And tonight they test their mettle against the best team in the National League when they start a three-game series at the Dodgers.

The regular season is barely one-third complete, but it’s not too early to consider this series as a potential playoff preview.

Both teams are coming off series wins, though the Phillies missed a chance at completing a three-game sweep of the visiting St. Louis Cardinals when the Cardinals earned a 5-3 win. The host Dodgers edged the New York Mets, 2-0 last night to win for the third time in the four-game set.

The two-time defending NL champion Dodgers, who have the best record in the game at 38-19, displayed their dangerous, well-rounded nature in beating the Mets.

The Phillies are in the midst of a 23-game stretch against the Dodgers, the NL Central-leading Chicago Cubs, the wild card-leading Milwaukee Brewers as well as three teams who will all enter today within a game of .500, the Colorado Rockies, St. Louis Cardinals and San Diego Padres.

“It’s definitely a test for us, but I don’t think we have to play with any pressure,” Phillies second baseman Cesar Hernandez said yesterday. “You go there and you see that they’re in first place, like us. Down the road, if we stay in first place and they stay in first place, you know that eventually we’re going to play each other in a bigger scenario.”

Maeda won his third straight start on Sunday, when he came off the injured list and allowed three runs over five innings as the Dodgers beat the Pittsburgh Pirates, 11-7. The 31-year-old was sidelined for 10 days with a left thigh injury.

Arrieta earned the win in his most recent start last Saturday when he gave up two runs over eight innings as the Phillies beat the Brewers, 7-2. It was the second time this season Arrieta has tossed eight innings.