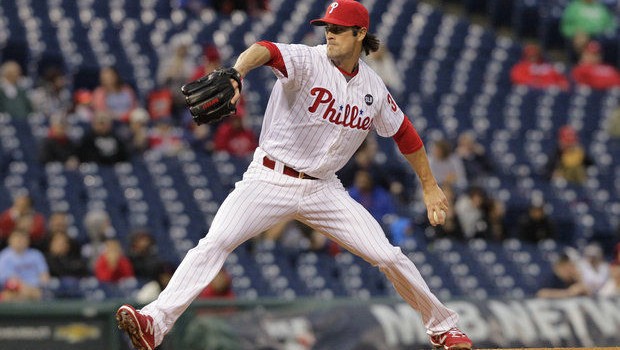 Cole Hamels remained winless through four starts after allowing an unearned run and five hits in six innings. Hamels lowered his season ERA to 3.75, but received low run support. He struck out five and walked three.

It’s a good thing it was a chilly and rainy night at Citizens Bank Park, because the Phillies’ 6-1 loss to the Miami Marlins was ugly and very few fans were there to see it — an announced crowd of 23,417.

Adeiny Hechavarria had a pair of hits and scored the go-ahead run and Miami took advantage of Philly’s sloppy play to end a five-game losing streak with a 6-1 victory over the Phillies on Wednesday.

”We haven’t gotten a lot of breaks,” manager Mike Redmond said. ”We got a few tonight and took advantage.”

They took the lead in the seventh. Hechavarria scored from third when Luis Garcia (1-1) balked while trying to hold the speedy Dee Gordon on first. It was the first run Garcia has given up in eight innings of relief this season.

And the Phillies’ defense struggled in the eighth when the Marlins scored four unearned runs with help from two Philadelphia fielding miscues.

”We didn’t do too much right tonight,” Phillies manager Ryne Sandberg said.

Cody Asche homered for the Phillies.

With two outs in the eighth, Ichiro Suzuki and Hechavarria both singled. Then Chase Utley dropped a routine throw to second on what could have been the third out, loading the bases for Gordon.

”It looked like he took his eye off it or anticipated he already caught it,” Sandberg said. ”Everything snowballed in the eighth inning.”

Center fielder Odubel Herrera then took an awkward path to Gordon’s drive to deep center, running with his back to home plate before spinning around close to the warning track and dropping the ball. All three runs scored, giving Miami a 5-1 lead.

Martin Prado followed with Miami’s only RBI, lining a double down the left-field line to score Gordon and put the Marlins 6-1.

The Marlins got their lone run off Hamels in the second when Marcell Ozuna scored from third when Hamels mishandled Utley’s throw to first on Jarred Cosart’s grounder that could’ve been the third out of the inning.

Philly tied it in the bottom half.

Asche, who entered with a team-best .341 average, continued his strong start by leading off the inning with a homer to deep right.

But the Phillies managed just three other hits off Cosart (1-1), who was impressive in his debut against the team that drafted him.

”Right now, we’ll take anything,” Cosart said. ”We’re trying to scratch out wins any way we can. It worked out for us today.”