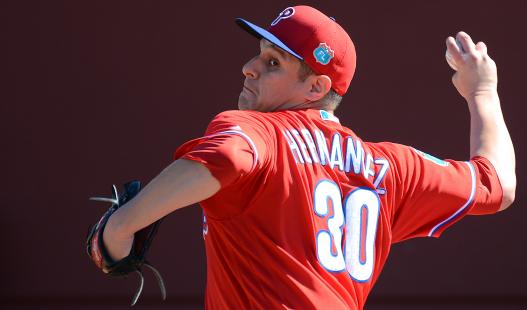 Phillies right-hander David Hernandez pitched a scoreless inning yesterday afternoon in a 5-3 loss to the Blue Jays in the Grapefruit League opener at Bright House Field.

Hernandez, 30, entered spring training a favorite to be the Phillies’ closer with Ken Giles traded to Houston in December.

Hernandez signed a one-year, $3.9 million contract shortly before the Giles trade became official. The Phils told Hernandez that he would be their setup man, but he also could have an opportunity to close.

It is an opportunity Hernandez has wanted for some time. He has 19 career saves, but he has never held the closer’s job on a full-time basis.

“That’s always been one of my goals once I got thrown into the bullpen,” Hernandez said. “I’ve had the stuff. It just comes down to helping your team and doing what you can with whatever role you have down there. It’s something I look forward to.”

Manager Pete Mackanin said earlier this spring that not every pitcher in camp wants to close, but Hernandez is not one of them.

“It’s the anticipation of the phone ringing,” said Hernandez, explaining why he loves to close. “That gets your heartrate going. And if you’re the closer, you know it’s for you. Everything turns up a little bit in the ninth inning. The fans get a little louder. The batters are locking in a little bit more because it’s their last at-bat. They’re trying to make a push to take the lead or tie the game. That brings the best out of me and I’m pretty sure other closers that go out there.”

Hernandez’s competition to close includes non-roster invitees Andrew Bailey, Edward Mujica and Ernesto Frieri. Luis Garcia is on the 40-man roster. Garcia has closer’s stuff, but he could be better suited as a setup man.

But Hernandez is the favorite because he is the only free agent the Phillies signed to a major league contract in the offseason. Interestingly, Hernandez told his agent beforehand that he preferred to play for a West Coast team that has spring training in Arizona.

Hernandez also said he preferred to play for a postseason contender He clearly didn’t check off those boxes with the Phillies, but he said he is happy with his situation.

“We’ve got a lot of good, young players,” Hernandez said. “Coming up with the Orioles, we struggled. I was just told by veterans, one day you may be on a team that may struggle and you’ve got to make sure the rookies and younger guys don’t get too down on themselves. It’s such a learning curve. It’s such a process to find success.

“You have your [Mike] Trouts, who hit .330 right away. But it’s not always going to be like that. It’s something you have to reinforce to the younger guys. You’re going to take your lumps, but you have to have the mentality to bounce back and work to get better.”

Hernandez hopes to pass along that knowledge to the team’s younger players during the season. And, if he gets the opportunity, he will pick up some saves along the way.