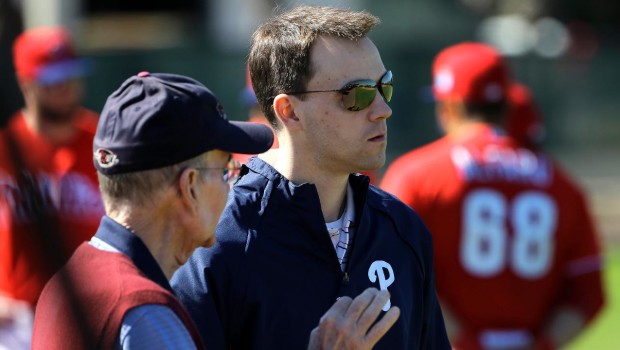 PHILLIES’ DATA DUDE ANDY GALDI GETS DOWN TO BRASS TACKS

For years one of the knocks on the Phillies’ front office was that they totally ignored the trend toward analytics.

Former GM Ruben Amaro Jr. denied that charge, but even new president Andy MacPhail, when he was introduced last summer, admitted that he knew very little about analytics.

So he hired 34-year-old Matt Klentak to be his next GM, and Klentak hired 30-year-old Andy Galdi, who cut his teeth at:

Google in Mountain View, Calif., where he served as a quantitative analyst for YouTube. The Phillies convinced him to leave lucrative Silicon Valley to run their analytics department, which includes data visualization and reporting, statistical research and data infrastructure.

“I would say I’m there to help organize their data, the data that they have there and the data that’s provided by MLB and [MLB Advanced Media],” Galdi told MLB.com. “And then I see how we can extract any kind of insight about anything regarding players or strategy or whatever.”

Galdi graduated from North Carolina in 2008, majoring in business administration and mathematics. He earned his Master’s degree in statistics from Stanford in 2013. He worked as a baseball operations intern with the Mets in ’09 and spent the following two years working in the NBA Commissioner’s Office as a statistical analyst before he joined Google.