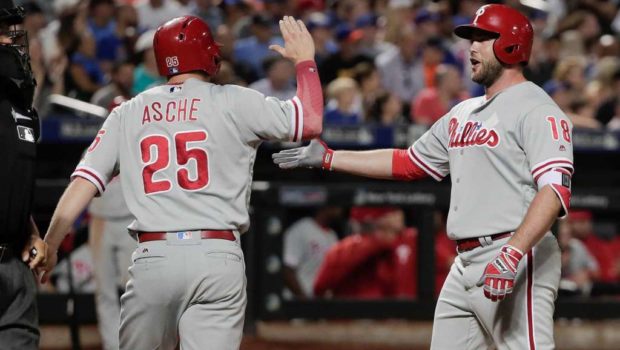 Darin Ruf crushed a pinch-hit, two-run home run to left-center field against Josh Smoker in a 10-5 loss to the Mets last night.

It was Ruf’s first home run of the season.

He opened 2016 in a platoon at first base with Ryan Howard, but after he hit just .158 in 31 games, the Phillies optioned him to Triple-A Lehigh Valley, where he remained until they recalled him Sept. 2.

Ruf’s blast traveled a projected 450 feet from home plate, according to Statcast™, making it the Phillies’ fifth-longest homer of the season. It also left his bat at 109.6 mph, making it the ninth-hardest-hit homer from Phillies this year.

Not bad, considering it was Ruf’s first plate appearance since Sept. 13.

“It’s just one at-bat,” Ruf said. “I mean, lucky that I was on the fastball. It’s part of being a professional hitter. It doesn’t matter how many games in between at-bats, you need to go out there. And no matter how bad or good you feel, put together an at-bat to help the team.”

Said Phillies manager Pete Mackanin: “Sometimes it’s good to come in cold like that. You just look for the ball and swing.”