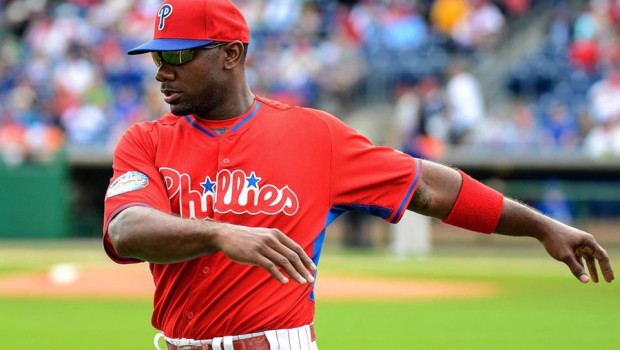 Feckless Phillies’ general manager Ruben Amaro Jr. made “news” Sunday when he announced to the media that:

Cliff Lee has soreness in his left elbow, which, after being shut down last July 31, can’t be a good sign, and will effectively kill any interested other teams have in trading for him; and

One of the teams that is most interested in trading for blue chip ace Cole Hamels has renewed its interest.

Meanhile, the Phillies are hitting .210 as a team, and as the Boston Globe’s Nick Cafardo wrote Sunday:

Papelbon probably has come the closest to departing. For about two weeks, the Phillies and Brewers were in talks, but the deal fell apart when the sides couldn’t come to an agreement on the payout of his $13 million vesting option for 2016.

“I don’t know if I was ever going to be a Brewer,” Papelbon said. “Nobody ever said a word to me about it. I read about it, but I guess it never got far along enough for my agents or the team to let me know something. As far as I know I’m a Phillie and everyone else is, too. Nobody’s getting traded, as far as I know. This is actually a good group of guys. Best I’ve been around since I’ve been here.”

Whether Papelbon is delusional, naive, or really feels nobody will be traded, the fact is everyone is for sale. The Phillies already have sold off longtime shortstop Jimmy Rollins in a deal with the Dodgers.

Phillies president Pat Gillick said the team, as currently constituted, could win 80-plus games. But he has also said the Phillies are retooling for 2017. General manager Ruben Amaro, whose contract is up at the end of the year and is on the hot seat, has not succumbed to the pressure of taking less than what he wants for his stars.

The Phillies have talked with the Red Sox, Yankees, Rangers, and Padres more than other teams. The Red Sox have not been willing to give up top prospects Blake Swihart and Mookie Betts for Hamels, a superb lefthanded starter.

According to one Phillies source, the Yankees have come the closest to landing Hamels, offering a package of prospects that at least has given the Phillies a baseline for future talks.

Hamels, who pitched two strong innings in his spring training debut Friday against the Yankees, has stopped talking about a trade. He said before camp that he was looking forward to pitching for a contender again, and that he would welcome a deal to Boston.

Papelbon wished the Phillies could have stayed together. “I think it was easier to add to this team and make it a contender than to rip it apart,” he said.

“I’ve been with the Phillies for a long time, and I love this team,” Ruiz said. “I want to stay and make it work here. But I know they have to do what they have to do.”

Hamels believes the entire team will be under a microscope.

“I don’t think anybody more than me,” he said. “All the guys are. There’s a lot of jobs to be won. I think if you’re a young guy, it’s a great position to be in. As veterans, I think that’s just the situation and scenario that happened over the last couple years that we’re in. I think it’s everyone, even the front office. It’s a team aspect, a team sport. And I think that’s just kind of where we’ve been placed.”

Howard might be the toughest to trade. His play has declined because of Achilles’ issues and he’s owed $60 million. The Phillies have tried to shop him, and are willing to take on most of the money, but there have been no takers. In a perfect world, the Phillies would use Darin Ruf at first base, but now he’s slated to play left field with Howard at first.

“Nothing has been broken up yet,” said Papelbon. “I don’t know. I’m not getting that sense from the front office.

“It’s real good here right now. Best since I’ve been here. It’s exciting. A lot of people read the headlines and think, ‘The Phillies are dismantling.’ Really there’s no dismantling going on.”

At least not yet.