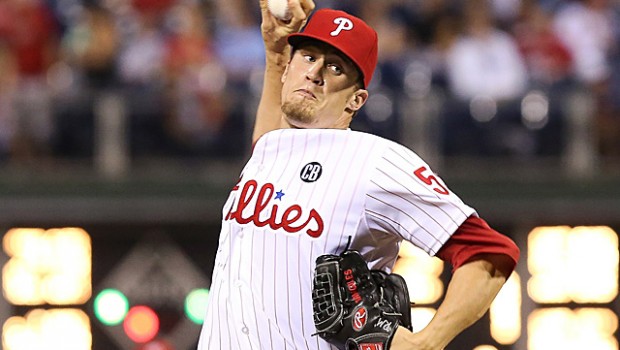 PHILLIES CLOSER GILES COULD ATTRACT BOATLOAD OF TALENT IN TRADE

Giles, who went 6-3 with a 1.80 ERA last season, including 15 saves in 17 opportunities after late July, when he replaced Jonathan Papelbon as the closer.

Klentak said last week at the GM meetings that “it’s not a goal” to trade Giles, but he also acknowledged “we’re trying to be opportunistic at every turn and trying not to operate in absolutes.”

FOXSports.com reported Thursday that the Marlins and Astros are just a couple of the teams to inquire about Giles.

The Phillies are listening, especially after the package the Padres netted from the Red Sox last week for closer Craig Kimbrel. Boston sent San Diego four prospects, including outfielder Manuel Margot and shortstop Javier Guerra. They are the No. 25 and No. 76 prospects in baseball, respectively, according to MLBPipeline.com.

In theory, Giles could fetch a similar package because he is paid significantly less than Kimbrel and cannot become a free agent until after the 2020 season. Kimbrel will make $11 million in 2016, $13 million in ’17 and has a $13 million club option, with a $1 million buyout, for ’18.

Of course, Kimbrel has a much longer track record than Giles. But because the Phils are not obligated to trade Giles like some of their veterans from last season (Cole Hamels, Chase Utley, Papelbon, etc.), they can hold out for what they want. That should keep the asking price high.

“I think Ken is terrific,” Klentak said. “He’s great in his role. We want to hold the leads we can hold, but I don’t want to categorically say we will or we won’t do anything.”