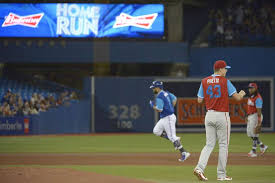 The Phillies are playing so badly lately that they can’t even win a game in which they had a 5-0 lead!

Aledmys Diaz hit a go-ahead three-run double in the eighth inning, and the Toronto Blue Jays rallied to beat the Phils 8-6, their sixth loss in seven games.

The Phils led 6-5 to begin the inning, but Seranthony Dominguez (1-5) loaded the bases by giving up a hit and a walk and hitting a batter. Victor Aranocame on and struck out Teoscar Hernandez for the second out before Diaz cleared the bases with a double over the head of center fielder Odubel Herrera.

Morales, who has hit seven home runs in his streak, matched St. Louis first baseman Matt Carpenter for the longest streak in the majors this season.

Rhys Hoskins had three RBIs and Roman Quinn had two hits and two RBIs for the Phillies, who began the day three games behind Atlanta in the NL East and two games out in the wild-card race.