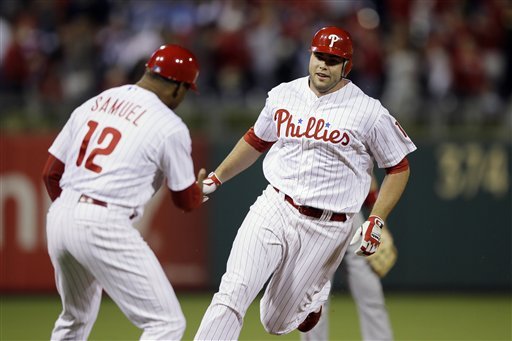 PHILLIES HAVE NO CHOICE: DARIN RUF’S BIG BAT HAS TO BE IN LINEUP

When one door closes, another opens.

It is a trite maxim, but the Phillies need to take advantage of it.

As Ryan Howard’s stellar career ends with a whimper, Darin Ruf’s may just be beginning.

Ruf is no great shakes in the field, but the Phillies need his explosive bat.

After going hitless in his first 11 at-bats this season, he blasted a pinch-hit solo home run to left field in the seventh inning Sunday afternoon at Citizens Bank Park. The first pinch-hit homer of his career tied the game in a 4-3 loss in 10 innings to the Nationals.

It was just the Phillies’ second home run through six games.

“You want to be the best player you can be in any role you are in,” Ruf said. “You play yourself into roles, and that role can change through the course of the year. I’m looking to stay positive and keep working hard.”

Ruf also had an .839 OPS against left-handers, which would seem to make him a strong candidate to platoon in left field or first base.

First baseman Howard went 0-for-4 with four strikeouts on 15 pitches before Ruf replaced him in the seventh. He ended four innings with strikeouts, leaving runners in scoring position three times.

Howard is hitting .150 (3-for-20) with three doubles, one RBI and seven strikeouts, but he is hardly the only Phillies hitter struggling. The team is hitting .214 with just 16 runs through six games.

“Howie is just looking for some consistency,” Sandberg said. “He was just a little bit behind the fastball off of [Nationals ace Max] Scherzer. Just didn’t connect today. He continues to work at things. Hopefully, Howie can regroup and get on the road. He’s going to continue working on it, I know that. He spends a lot of time working at it.”

Ruf is working at it, too. The Phillies are looking for people to hit. There should be opportunities for others.