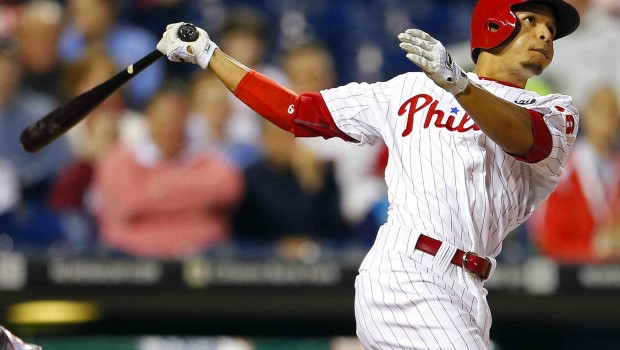 WHEN WILL PHILLIES ROOKIE CESAR HERNANDEZ DUMP HIS SLUMP?

The rubber has hit the road for Phillies rookie second baseman Cesar Hernandez.

Or shall I say at home.

The Phillies have traded several major components to one of the franchises most successful periods, including a World Series title in 2008. That has afforded playing time for young players such as Freddy Galvis and Odubel Herrera, both of whom were in the lineup on Wednesday night at Citizens Bank Park against the Mets.

Cesar Hernandez has also seen a lot of playing time, but he started the night on the bench after a five-game slump that saw him hit .048 (1-for-21). Manager Pete Mackanin isn’t concerned about the 25-year-old, and in fact, saw this as a chance to get a better feel for the young infielder’s mental makeup.

“When you think about it, he didn’t play a lot early in the year. He has 300 and some at-bats. He plays in the winter, too, so physically he’s fine and is used to it. You get tired mentally more than physically, but he’s going to come out of it.”

Hernandez has played in a career-high 110 games so far this season and has hit .266 with 50 runs scored and 29 RBIs. Much of April saw him used as a late-game replacement, but with the injuries and subsequent trade of Chase Utley to the Dodgers, he started 32 of 33 games since the All-Star break until Wednesday night.