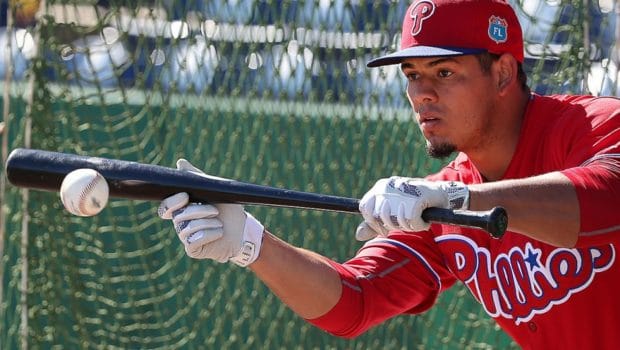 PHILLIES’ CESAR HERNANDEZ MAY BE THE BEST BUNTER IN THE MAJORS!

One major reason he was able to hit .294 — his ability to bunt for hits, a bit of a lost art in this age when swinging for the fences reigns supreme.

As ESPN.com has pointed out, Hernandez led the majors with 15 bunt hits; the only other players in double digits were Adam Eaton with 12 and Rougned Odor with 10. According to FanGraphs, Hernandez was 15-for-28 when attempting to bunt for a hit, a .536 average. Take away those 28 plate appearances and his .294 overall average dips to .281, so the bunts added about 13 points of batting average and on-base percentage to his numbers.

In fact, you could argue that Hernandez should attempt to bunt for even more hits, given his ability. The most bunt hits since 2010 is the 23 Juan Pierra had in 2011 — and he hit just .371 on bunt attempts that year. Hernandez wouldn’t be sacrificing much in the way of power — he had just 31 extra-base hits in 2016 in 622 plate appearances — so if he attempts 40 or 45 bunt hits, he could push his OBP even higher.

0 thoughts on “PHILLIES’ CESAR HERNANDEZ MAY BE THE BEST BUNTER IN THE MAJORS!”