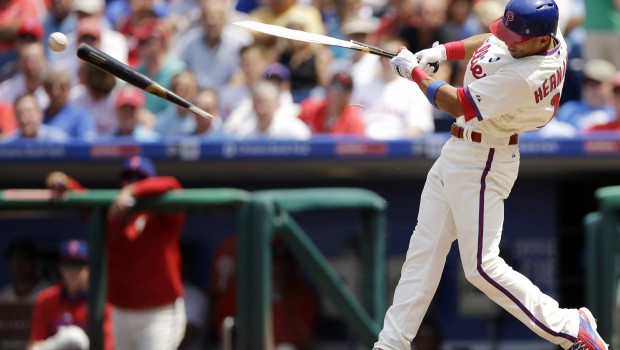 This wasn’t supposed to be the way the Phillies rolled in 2017, but…

Cesar Hernandez ignited a big rally in the eighth inning that helped the Phillies sweep Atlanta and improve to 9-9.

He hit a two-run home run to right-center field against Arodys Vizcaino to hand the Phillies a 3-1 lead.

Hernandez is hitting .338 (27-for-80) with four doubles, one triple, four home runs, 10 RBIs, 18 runs, three stolen bases and a .939 OPS in 19 games. He has the best OPS of any second baseman in the National League and ranks third among all second basemen.

His continued excellence atop the Phillies’ lineup has helped the offense, which is ninth in baseball in runs scored (85).

“I love watching Cesar hit the ball,” Herrera said. “He has a beautiful swing, and he makes great contact on the ball. It’s great to be behind him.”

“I played with him in Williamsport in short-season [in 2010], and even then he could always hit,” Altherr said.