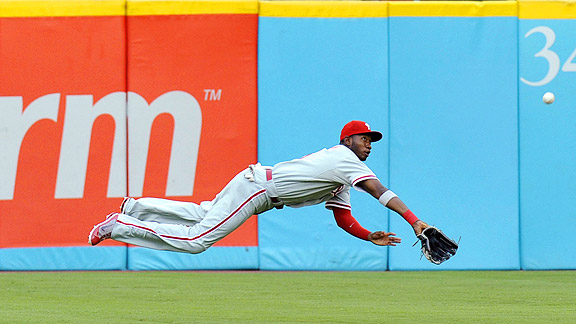 Let me see if I have this right.

Phils outfielder Domonic Brown, he of the .229 batting average and .617 OPS, second lowest among starting outfielders in all of baseball, is complaining that he’s not getting a fair shot to prove himself?

It takes a lot of guts for an underachieving hitter who has demonstrated that he can’t field any better than an outfielder for the Taney Dragons to call out his manager’s judgment.

Ryne Sandberg not only has to deal with managing a last-place team with veterans who are well past their prime and a giant void when it comes to young talent, but apparently he has to call wild underachieving outfielders and obstinate rookie pitchers into his office to discuss their comments from the night before.

That’s what happened Sunday morning when Brown and David Buchanan were called into the principal’s office to discuss some of their gripes after Saturday night’s 6-5 loss to the Cardinals with Sandberg.

Brown, who essentially lost the game for the Phillies by making a pair of weak efforts for fly balls and a throwing error that amounted to a three-run inning for St. Louis, claimed that his ineptitude as an outfielder was a result of not enough playing time.

“I’m not out there every day so it’s kind of tough coming off the bench,” Brown said after he made his seventh start in the last eight games and before he somehow again started Sunday despite his general cluelessness. “I’m doing the best I can out there.”

Seeing that quote was enough for Sandberg to call Brown, who turns 27 in nine days, into the office for a talk.

“I had a conversation with him on that,” Sandberg said. “It was more frustration than anything.”

Brown, who was taken out of Saturday’s game an inning after his defensive buffoonery, seemed to want to stay on the playing-time issue, even though the stretch where he didn’t play came on the heels of his bagging out of playing for two stretches in a three-week period because of illness.

“He told me I came out (Saturday) because of the double-switch, not because of how I was playing,” Brown said of his conversation with Sandberg. “Everything is good. I just want to play more. That’s it. He knows. It’s tough on him. Grady (Sizemore) has been swinging the bat well and (Darin) Ruf has to play as well. It’s tough for him right now.”

It would seem the toughest thing would be to keep playing Brown, who has the second-lowest OPS among starting outfielders in the majors.

As for Buchanan, he griped about being pulled after five innings of work, during which he allowed two runs on eight hits and had pitched out of a few jams. Pitching coach Bob McClure had a conversation with the right-hander at his locker before Buchanan, McClure and Sandberg convened in the office.

“That has been addressed,” Sandberg said.