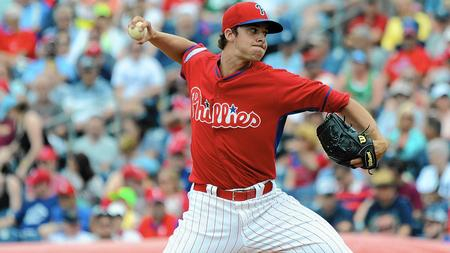 PHILLIES CALL UP ARM OF THE FUTURE NOLA, TO START TUESDAY NIGHT

That is the night that the rebuild of the once-proud and now-worst-team-in-baseball by a long shot officially begins.

Aaron Nola was called up this morning from Lehigh Valley and he will make his debut on Tuesday night at Citizens Bank Park against the Tampa Bay Rays.

Making his sixth start since a mid-June promotion from Double-A, Nola was roughed up Thursday night for a season-high six runs, five of them earned, over a season-low three-plus innings in a 6-0 IronPigs road loss to the Rochester Red Wings.

Nola’s Triple-A ERA shot up from 2.43 to 3.58 due to his bad night, which resulted in his first loss since a Class AA start for the Reading Fightin Phils on May 25.

The 22-year-old right-hander had been expected to debut in the big leagues soon, perhaps in early August if the worst-in-baseball Phillies do what’s expected and deal ace Cole Hamels for prospects before the July 31 trade deadline.

The seventh overall pick of the 2014 draft, Nola had held opponents to three or fewer runs in 14 consecutive starts since giving up four over 4 2/3 innings in his season debut, an April 11 Class AA game at Portland.

Nola gave up three first-inning runs on Thursday, two coming on a homer by Oswaldo Arcia, then was knocked out in the fourth after five consecutive Red Wings reached base on a leadoff homer by Danny Ortiz, a single, walk and two more singles.