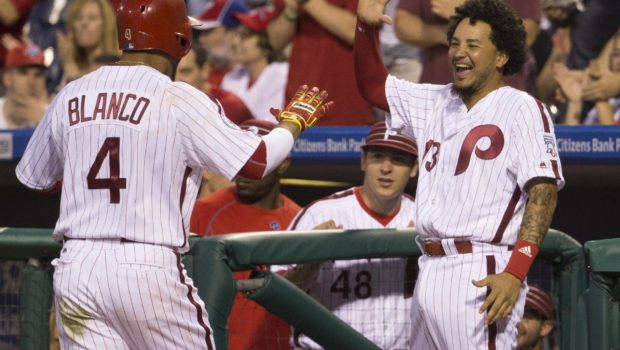 PHILLIES BUST OUT OF SLUMP WITH 6-3 WIN OVER BREWERS

The mostly mute Phillies bats made a lot of noise last night at the Bank.

Next to last in the National League in home runs, the Phils got long balls from catcher Cameron Rupp and infielder Andres Blanco to break a seven-game losing streak with a 6-3 win over the Brewers.

Milwaukee starter Jimmy Nelson, who came into the game leading the team with eight quality starts, gave up both homers while allowing six earned runs in four innings. That also ended a string of seven games in which the Phillies scored three or fewer runs.

The Brew Crew had previously won eight straight in Philly but fell Friday despite a two-RBI performance from shortstop Jonathan Villar that included his second home run in as many nights.

Phillies starter Vince Velasquez, who had a 10.38 ERA in his previous two starts, overpowered the Brewers for four shutout innings, striking out six. But he loaded the bases with nobody out in the fifth, allowed a run on a sacrifice fly, then walked the bases full again before coming out of the game without qualifying for the win.

Reliever Andrew Bailey pitched out of trouble in the fifth and then had a 1-2-3 sixth. He’s now 3-0. Jeanmar Gomez got his major league-leading 18th save.

“We got the tying run up to the plate [in the eighth after] we were down 6-0, which you like to see,” Brewers manager Craig Counsell said, “but we just couldn’t get that next hit.”

Trying to jump-start the Phillies’ offense, Mackanin played small ball in the third, and it resulted in two extra runs. With one out and Odubel Herrera on first, Herrera broke for second on a 1-1 pitch to Blanco. Second baseman Scooter Gennett broke to cover the base and was barely able to recover to throw Blanco out when he slapped a grounder behind him. But that prevented an inning-ending double play, and consecutive singles by Maikel Franco, Tommy Joseph and Jimmy Paredes resulted in two additional runs.