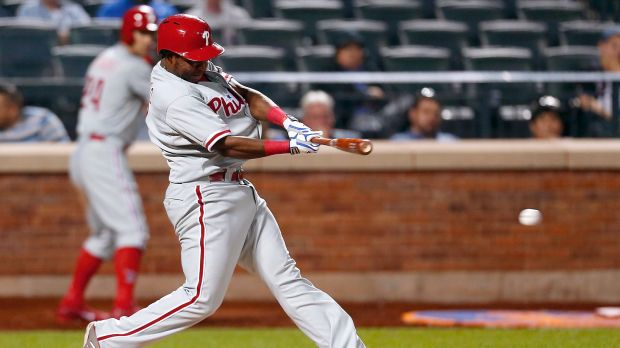 PHILLIES’ BULLPEN MELTS DOWN AGAIN IN 5-4 LOSS TO METS

As Phillies general manager Ruben Amaro Jr. continues to make a fool of himself by insulting the team’s fans and their understanding of the game:

The Bigger Story is the meltdown of the Phillies’ supposedly brilliant bullpen.

Wilmer Flores singled home the winning run with two outs in the 10th inning for his second huge hit in two days, giving the New York Mets a 5-4 victory over the Phillies on Tuesday night.

Maikel Franco (above) capped a four-run rally in the eighth with a two-out RBI single against Carlos Torres that gave the Phillies a 4-3 lead.

”Big moment for him,” manager Ryne Sandberg said. ”It was good to see him come through.”

The Phils got five straight hits in the inning, and the Mets used four pitchers. Ben Revere hit a two-run triple off rookie reliever Hansel Robles and scored on Freddy Galvis’ single through a drawn-in infield.

New York responded in the bottom half with Flores’ sacrifice fly against Ken Giles following a leadoff walk to Duda and Murphy’s double.

Franco kept it tied with an outstanding play at third base on a slow roller by rookie pinch-hitter Darrell Ceciliani.

Working on another dazzling start at Citi Field, deGrom was cruising along with a 3-0 lead in the eighth before consecutive one-out singles put a Phillies runner on second base for the first time all night.

But everything he accomplished in 105 pitches was undone by Robles in four.

Last season’s NL Rookie of the Year, deGrom struck out nine and walked none. He has not allowed an extra-base hit in 25 1/3 innings.

The slim right-hander retired his final 23 batters in his previous start against St. Louis, throwing eight shutout innings of one-hit ball that left him 10-1 with a 1.19 ERA and 94 strikeouts in his past 12 outings at home.

New York scored three times off Jerome Williams with two outs in the third after deGrom beat out a double-play ball. Duda beat the shift with an RBI single, and Cuddyer broke his bat on a two-run single with the count 0-2.

”You just have to live with that, but I think it all could have been prevented with the walks,” said Williams, who issued two of his four free passes in the inning. ”I didn’t know deGrom was that fast. He got down that line pretty good.”