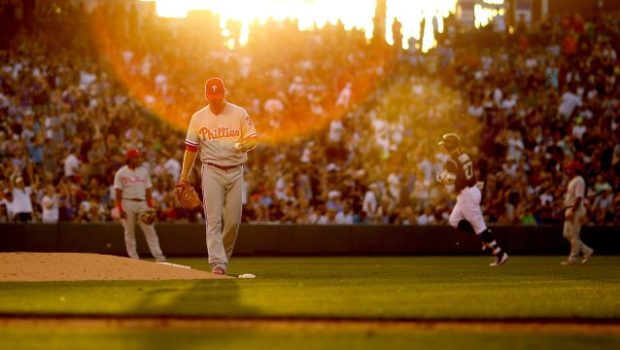 Trevor Story (above) launched his 20th and 21st home runs to tie the NL rookie record before the All-Star break, and his four RBIs led the Rockies to an 11-2 victory over the Phillies at Coors Field on last night.

Dave Kingman (1972) and Albert Pujols (2001) also hit 21 before the All-Star break as rookies. Story has three more games against the Phillies to eclipse that number.

“It’s good to see him swinging the bat,” Rockies manager Walt Weiss said. “He really hit those two balls tonight. He had a great at-bat with the walk. He’s done that a few times here recently. Unbelievable first half. What a way to start the career.”

The Rockies jumped on the board early, scoring in four of Phillies starter Adam Morgan’s five frames. Nolan Arenado hit an RBI double in the first and Mark Reynolds homered to lead off the second before Story hit a three-run homer in the third and a solo shot in the fifth. Colorado added five more in the seventh offEdubray Ramos on singles by DJ LeMahieu and Brandon Barnes and a three-run double by Reynolds.

Rockies starter Chad Bettis had his best start and second quality start since May 17. He held the Phillies to two runs on seven hits over 6 2/3 innings with five strikeouts and one walk. Ryan Howard homered off him to right-center in the second and drove in Maikel Franco two innings later on a single to left.

“I think all-around it was a great team win,” Bettis said. “Honestly, I think we got our offense back and for the most part did our job as a pitching staff. I think I could’ve been a little bit better in the sense of executing a couple pitches to Howard, but that’s part of baseball.”