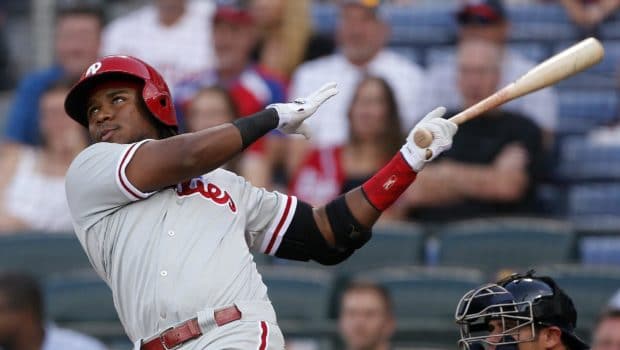 PHILLIES BREAK OUT AGAINST WOEFUL BRAVES IN 7-5 WIN

The Phillies figured out how to get out of the hitting slump that has affected them since the All-Star break:

The Phillies had lost nine of their past 13 games, while their offense had not scored more than four runs in a game since the All-Star break. But in a 7-5 win over the Braves at Turner Field last night, the Phillies snapped their recent run-scoring drought with a five-run first inning and three homers.

Matt Wisler put Atlanta in a first-inning hole when he allowed a three-run home run to Maikel Franco (above). Tommy Joseph followed with a solo shot, marking the fourth time this year the Phillies have hit back-to-back homers. Two more batters reached base before Wisler recorded the first out of the game on his 27th pitch.

“That’s what you kind of like to have,” Phillies manager Pete Mackanin said. “When 3-4-5 come up, you hope the other team gets nervous.”

The Braves right-hander settled in after that, retiring 13 of the next 15 batters. But after giving up a two-out single to Joseph in the fifth, Aaron Altherr hit a two-run homer to give Philadelphia a 7-0 lead.

Aaron Nola held Atlanta scoreless until the fifth, when Freddie Freeman sparked a three-run inning with an RBI double. The Braves tallied a run in the sixth and ninth innings, but it wasn’t enough, as they fell to 3-7 against the Phillies this year.

“It’s just hard when you get down,” Braves manager Brian Snitker said. “The biggest pitch was the two-run homer [Wisler] gave up. You can live with the five [runs in the first inning] and then he settled in, but that was huge right there I thought. Five is doable with all of the at-bats we had left.”