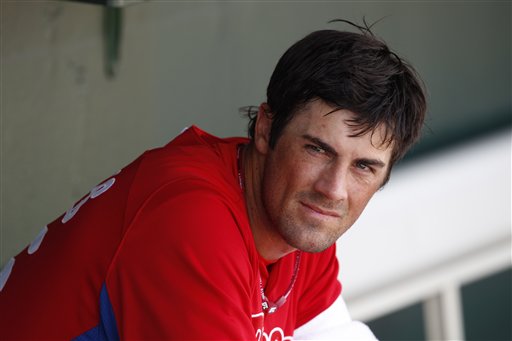 ARE PHILLIES BOWING TO HAMELS’ DEMANDS ON WHEN HE’LL PITCH?

Here are some basic truths about Cole Hamels:

He has been one of the best pitchers in Phillies history.

He has a whiny, irritating voice and he constantly says, “you know” just like a Valley Girl.

He has a delicate personality.

He is overpaid, given his body of work during the last two months.

He has not helped the Phillies’ case as they try to trade him for a boatload of future prospects.

Okay, a couple of future prospects.

Now, it appears that he is decided when he will pitch.

Not the pitching coach.

Not the general manager.

“(Hamels) pitches in San Francisco. He gets lit up. Now the day he’s supposed to pitch is (last) Friday. He tells the organization he doesn’t want to until (Sunday). Now he went on vacation. He said he didn’t have a (throwing) session. But he didn’t pitch against Miami’s best pitcher (Jose Fernandez) and he pitches Sunday against what would be against their third starter because everybody restarts their rotation.

“Now Cole Hamels in the last couple of days says he’s (next) pitching on Saturday. Pete Mackanin says his day is Friday and they haven’t announced it yet. But I understand Cole Hamels will get his way again and get the extra day after pitching (6 1/3) innings in two games.

“Now I just started checking the pitchers and I think there’s some substance to this: (Ace left-hander) Jon Lester is pitching for the Cubs on Friday, so he won’t pitch against Jon Lester. Let’s take it another step. By not pitching on Friday, which is his day in the rotation, (next week) he now misses Toronto, who by the way has scored 90 more runs than anybody else in Major League Baseball.”

Hearing Eskin’s radio rant, Cataldi countered, “I want to hear the spin that Ruben has. How can he justify that?”

Later Tuesday morning, Amaro was on WIP for his weekly spot. Here’s his spin:

“We got together … Pete Mackanin, (pitching coach) Bob McClure and myself. … We put Hamels in the best position to be ready so that he could throw a bullpen when we got back on Friday and then pitch on Sunday. So that was planned out and something that we talked amongst ourselves about and went forward with it.

“He’s not hurt, but I don’t believe he’s going to be traded because the Phillies aren’t going to get what they think his value is,” Eskin said. “He’s given up 14 runs in his last two starts. If you’re another team and you see he’s only pitched three times in 20 days … ‘Is there something wrong with this guy? Is he hurt that he’s only pitched three times in 20 days.'”