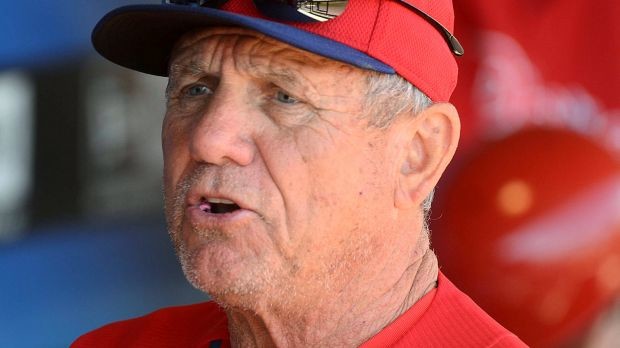 Which means that if any Phillies player — or former Phillies — is under attack, Bowa’s loyalty comes to the surface.

Bowa played shortstop for 15 years in the big leagues when middle infielders risked getting their legs broken nightly by sliding runners and not a word was said.

Contacted by the New York Post while he was at yesterday’s Saints-Eagles game at the Linc, Bowa was asked if the criticism from the Mets that the Dodgers’ Chase Utley was getting for sliding into Ruben Tejada and breaking the Mets shortstop’s leg in Game 2 of the NLDS Saturday night in Los Angeles was warranted.

“Chase is not a dirty player,’’ said Bowa, who managed Utley in Philadelphia in 2003-04 and has been the Phillies bench coach the past two seasons when Utley played second base.

“It might have been a late slide, but if anything, [Tejada] should have known it wasn’t a double-play ball.’’

Utley received a two-game suspension on Sunday. The second baseman has appealed, and his case could be heard as soon as today.

According to Bowa, when Tejada had to turn his back on Utley to receive the ball, that should have been the end of the play. Instead, Tejada turned toward first.

“It wasn’t a double-play ball,’’ Bowa said before Major League Baseball announced Utley’s two-game suspension. “Once you turn your back on the runner, get the out [at second] and get out of the way.’’

Bowa, who also managed the Padres, was the Yankees’ third base coach from 2006 to 2007, and played briefly for the Mets in 1985, which was his last season. He was known for sure hands, an accurate throwing arm and a hard-nosed style of play.

“I am a bad guy to ask about these things because it happened at least once in every game we played,’’ said Bowa, who helped the Phillies win the 1980 World Series against the Royals. “That’s the way the game was played then.’’

Bowa said he understands MLB’s effort to protect the modern player from injury, adding Utley may have been guilty of sliding late, but he believes Utley didn’t intentionally break Tejada’s leg.

“Chase is not a dirty player, he plays hard,’’ Bowa said.