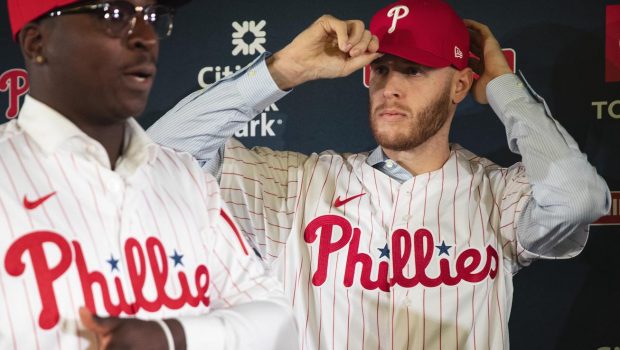 PHILS BLOWING SMOKE IF THEY THINK THEY’LL WIN WITH THIS ROSTER!

But it seems as if the Phillies have stopped looking for more talent in the free agent market because they think they are a contender as they are presently constructed.

“Now, when you bring back the core of that team that is still very young, still very talented, you add a new manager, a new pitching coach, these two new guys here [Gregorius and Wheeler] and whatever else we may do for the rest of the offseason, I think you’re looking at a very, very competitive club. Now, I recognize, as we all do, that the National League East is a very competitive division. It may be the most competitive division with four teams that are good and continuing to go for it. It’s going to be a challenge, but I do believe this team has the talent to win the division.”

Nola, Wheeler, Jake Arrieta and Zach Eflin are expected to lock up the first four spots in the Phillies’ rotation. Vince Velasquez, Nick Pivetta and others will compete for the No. 5 job.

“I don’t know that for certain that we won’t add another starter,” Klentak said. “We’ve got a long way to go before Spring Training, so it’s possible that we will.”