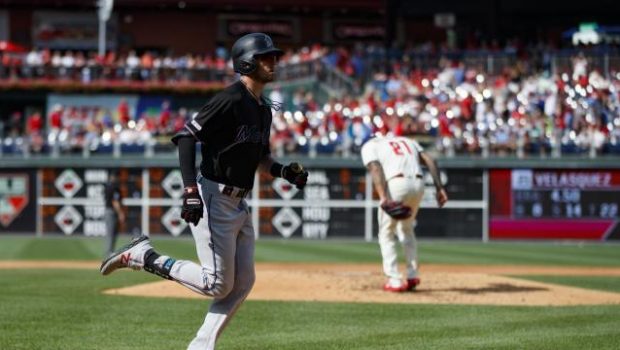 PHILLIES BLASTED FROM THE PAST, FALL 5 1/2 GAMES OUT OF 1ST!

Wilkin Castillo hit a go-ahead two-run double in the seventh inning, lifting the Miami Marlins to a 5-3 victory over the Phillies.

Castillo hadn’t played in the big leagues since June 20, 2009 with the Cincinnati Reds. The 35-year-old catcher suffered a torn labrum in his right shoulder and bounced around the minors before he was called up from Triple-A on Friday.

The Phillies have lost six in a row and 15 of 21. They’ve fallen 5 1/2 games behind NL East-leading Atlanta after holding a 3 1/2-game lead before their skid began on May 29.

Austin Brice (1-0) struck out two in a perfect sixth for the last-place Marlins, who’ve won three in a row. Wei-Yin Chen tossed 2 1/3 scoreless innings and Jose Quijada retired Cesar Hernandez on an infield popup for the final out with the bases loaded for his first save in his seventh big-league appearance.

Manager Gabe Kapler was ejected for the first time in his managerial career for arguing after Scott Kingery struck out swinging in the fourth. The pitch appeared to hit Kingery. Fans gave Kapler a standing ovation during the argument and after he was tossed. Kapler kicked dirt toward plate umpire Chris Guccione before leaving the field.

Phillies starter Vince Velasquez retired 15 of 16 batters, allowing Riddle’s homer and striking out five. The right-hander made a strong case to remain in the rotation.

Down 3-1, the Marlins rallied against Adam Morgan (2-2) in the seventh. Garrett Cooper walked to start the inning and Brian Anderson followed with a single. Starlin Castro’s RBI single cut it to 3-2.

After Anderson got caught in a rundown and was tagged out on Cesar Puello’s grounder to first, Riddle popped out to shortstop. Edubray Ramos replaced Morgan and Castillo ripped his first pitch off the right-field fence to score both runners, giving Miami a 4-3 lead.

Anderson’s RBI single off JD Hammer in the eighth extended the lead to 5-3.

After Riddle gave the Marlins a 1-0 lead in the third on his second homer, the Phillies answered in the bottom half. Harper lined his 13th homer out to right and Hoskins drove his 16th into the seats in left-center.

Harper’s RBI single to left gave the Phillies a 3-1 lead in the fifth. He was thrown out trying to stretch it into a double.