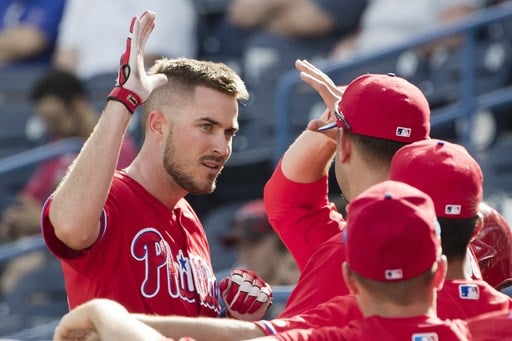 Tommy Joseph hit the first of four Phillies home runs yesterday in a 7-5 win over the Baltimore Orioles. His two-run shot in the second inning produced the first runs of the game.

Scott Kingery, Brock Stassi (above) and Aaron Altherr also homered for the Phillies.

Kingery (3-for-4) and Altherr (2-for-3) were the only Phillies with multiple hits.

Clay Buchholz started, pitching in his first game in a Phillies uniform. He threw two scoreless innings, allowing two hits while walking one.

The Orioles got their first run off of Jeanmar Gomez in the inning he pitched but did most of their damage with Nick Pivetta and Elniery Garcia on the mound. Both Pivetta and Garcia allowed two runs, although only one of Garcia’s was earned and he actually ended up with the win.

Cesar Ramos completed a perfect ninth for the save.