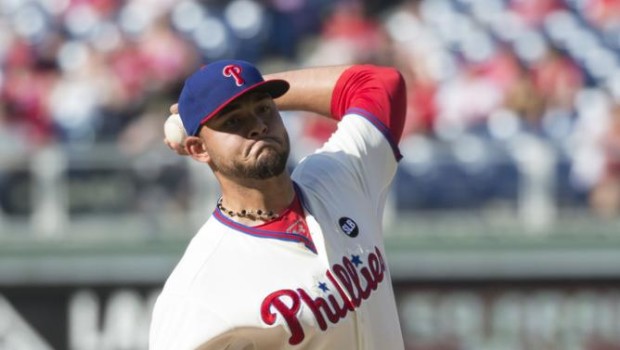 PHILLIES’ BET ON ELVIS ARAUJO IS PAYING OFF IN THE PEN!

The Phillies have swung and missed on so many prospects in the past decade that:

Even though Elvis Araujo had never thrown a pitch above the Double-A level, they signed the coveted Venezuelan left-hander to a major league contract last November.

The Phillies have been rewarded for their faith in the 24-year-old, especially of late. Araujo hasn’t allowed a hit over his past nine appearances entering Sunday, a span of eight innings dating back to July 19.

“I’m just working hard every day and trying to keep the ball down and continue to just make my pitches work,” Araujo said. “[I’ve had to learn] my routine, [this] being a process, continuing every day to get better.”

Opposing hitters are 0-for-27 with just three walks against Araujo since, as he’s become a weapon in the bullpen for Phillies interim manager Pete Mackanin.

“He’s got a good downward plane,” Mackanin said of the 6-foot-7, 270-pund lefty.. “He’s a big, tall guy. He’s showing a good mound presence. He looks like he’s in control of himself. It all boils down to him making good, quality pitches.

“You can throw 98 mph, but if you are leaving it thigh-high down the middle, most likely it is going to get hit. You hit either side of the plate and keep the ball down, you’ve got a chance. That’s what he’s been doing. He’s showing a better breaking ball than we saw earlier. We’re going in baby steps with him and he’s responding. He has a lot of confidence right now.”

Araujo has done so in the Phils’ series in Milwaukee. He struck out a pair in a scoreless inning against the Brewers on Friday and struck out Shane Peterson in the seventh inning Saturday to strand a pair of inherited runners.

“I just take the good things and the bad things,” Araujo said. “[I’m going to] keep what I’m doing and growing from there.”