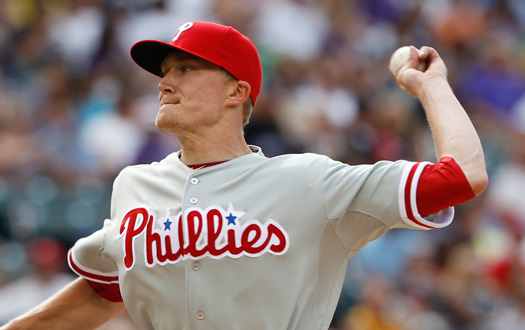 ARMS RACE: BATTLE IS ON FOR SPOTS IN PHILLIES’ BULLPEN

There are many intriguing questions that will be answered, at least partially, in the Phillies’ spring training:

Will Domonic Brown learn how to play the outfield?

But the most interesting question is who will fill out the rest of the Phillies’ highly rated bullpen.

RHP Jonathan Papelbon: He is a lock, as well as the closer — assuming the Phillies do not trade him before opening day.

RHP Ken Giles: His 0.79 WHIP last season ranks fifth among all rookie relievers since 1914. His 5.82 strikeout-to-walk ratio is sixth, and his 12.61 strikeouts-per-nine innings average is 10th. He is a lock to make the team.

RHP Justin De Fratus: He struggled in his first four appearances before being sent to Triple-A Lehigh Valley. He returned and posted a 1.89 ERA in 50 appearances from May 26 through the end of the season. He is a lock, as well, leaving three jobs available in a seven-man bullpen.

Here’s where it gets interesting, with descriptions by MLB.com’s Todd Zolecki:

LHP Andy Oliver: He has an edge, if for no other reason than he is a Rule 5 Draft pick on a rebuilding team. If the Phillies like what they see, they could stash him in the bullpen just to keep his arm in the organization. But he will need to throw strikes. He struck out 85, but walked 47, in 64 innings last season with Triple-A Indianapolis (Pirates).

LHP Mario Hollands: He was one of the best stories of 2014, coming out of relative obscurity to make the opening day roster. He pitched pretty well, too. He has a very good chance to make the team. The Phillies carried three left-handers in the ‘pen last year, so it’s not out of the question Diekman, Oliver and Hollands make the team.

RHP Luis Garcia: The Phillies named Garcia their Minor League Pitcher of the Year in 2014, based upon a dominant performance in Triple-A. Garcia fizzled in his first four appearances with the Phillies, posting a 12.71 ERA. He improved in his final nine, though, posting a 2.16 ERA. The Phillies believe that is the real Garcia, but he will have to prove it this spring to get a job.

RHP Jeanmar Gomez: The non-roster invitee entered camp under the radar, but he has a good chance to make the team. The 27-year-old posted a 3.28 ERA in 78 appearances over the past two seasons with Pittsburgh.

RHP Hector Neris: He pitched a scoreless inning last season for the Phillies, but went a combined 6-3 with a 3.61 ERA in 48 appearances last season with Double-A Reading and Lehigh Valley. He will have to put up strong numbers in camp.

RHP Phillippe Aumont: He is out of options, so if he does not make the opening day roster, he will have to clear waivers before the Phillies can send him to Triple-A. He has a great arm, but he has been unable to put it together. The possibility of losing Aumont could push him onto the roster, but only if he pitches well (i.e. throws strikes).

RHP Ethan Martin: He missed some time last season with a shoulder issue, and Sandberg said his mechanics need some fine tuning. Martin would have to come on strong to turn a few heads.

RHP Paul Clemens: He could be this season’s Jeff Manship, who made the 2014 opening day roster as a swingman. But Manship had to pitch really well to earn that spot. Clemens will have to do the same.