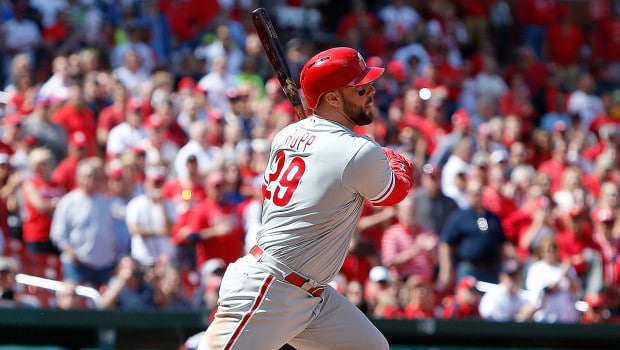 PHILLIES’ BATS ALL OF A SUDDEN HAVE THE SOUND OF SILENCE

All of a sudden, the Phillies’ bats, which have occasionally been effective, have the sound of silence.

“You look at the batting averages, and they’re not the greatest,” Phillies manager Pete Mackanin said. “I think these guys, they don’t look like they’re settled in. I’d like them to be after a month, but they’re just not hitting the way they’re capable of hitting.”

The lineup had several noticeable changes. Ryan Howard, who has scorched Cardinals pitching in his career, sat against the lefty Jaime Garcia, as did the slumping Maikel Franco. The pitcher moved back from the eight to the nine-hole.

Mackanin was tempted to play Howard after he hit two home runs in the past two games, but he is a career .167 hitter against Garcia.

Peter Bourjos had the best chance to dent the scoreboard with runners at first and third and just one out in the fifth. He hit a line shot, but it went right to first baseman Brandon Moss, who caught it and tagged out Tyler Goeddel to complete the unassisted double play.

“Coulda, shoulda, woulda,” Mackanin said. “That ball’s over his head or left or right of him, and we get something going.”

The Phillies have tallied 90 runs scored this season, and they have scored two runs or fewer in 12 of their first 29 games.

Freddy Galvis reached base twice, on a hit and an error. He raised his average to .229, still more than 30 points lower than what he hit last season.

Although he, Franco and several other Phillies have gotten off to slow starts, Galvis said there is no frustration.

Garcia was dominant through seven innings, giving up just two hits and striking out five. The Phillies are now hitting .156 (28-for-179) against left-handed starters this season.

“It’s concerning, but I think one of the reasons why is we haven’t seen enough lefties,” Mackanin said. “I think we’ve seen six starting left-handers in 29 games. That’s the reason a lot of lefties are effective, because they’re not seen as much as righties.”