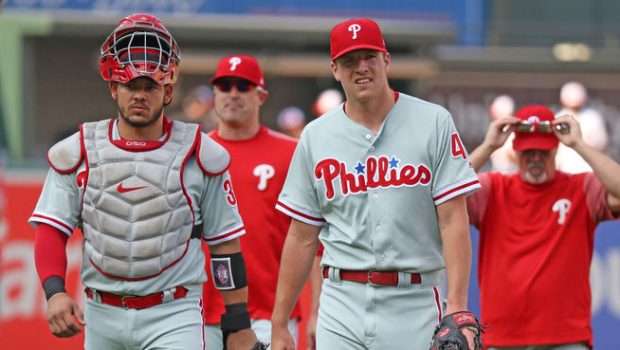 PHILLIES BACK INTO 1ST ALL ALONE, THANKS TO JORGE AND NICK!

The Phillies rode the Jorge and Nick show past the Orioles and back into sole possession of first in the NL East.

Jorge Alfaro homered and drove in three runs, Nick Pivetta took a three-hitter into the seventh inning and the visiting Phils won 5-4.

The Phillies got 12 hits off Kevin Gausman (4-7) while building a 5-0 lead against the team with the worst record in the majors.

“There were some tired guys out there, but they grinded it out,” manager Gabe Kapler said. “When you’re tired, it’s very difficult to bring your A game. I’m really proud of our men today.”

Alfaro, the No. 9 hitter, singled and scored in the third inning, hit a two-run double in the fourth and led off the fifth with his sixth home run.

Homers by Trey Mancini and Jace Peterson brought the Orioles within a run, but the Phils held on to move a half-game ahead of idle Atlanta.

Pivetta had a no-hitter through four innings and finished with seven strikeouts. Pivetta (6-7) gave up three runs and five hits before being pulled with two outs in the seventh.

He got the win, so that made it worth missing a day in the Florida sun.

“It was tough,” Pivetta said. “We were supposed to have an off day in Miami today. The guys got in late last night, so it was big for them to come here and win a baseball game.”

Seranthony Rodriguez worked the ninth for his ninth save.

Gausman yielded a single to Cesar Hernandez to open the game, and the hits kept on coming for the Phillies. Gausman allowed a career-high 12 hits over five-plus innings, but manager Buck Showalter insisted the right-hander’s performance was better than the numbers indicated.

“It’s been a long time since I’ve seen that many poorly hit balls fall for hits,” Showalter said. “I’ve got no fault with the way Kevin pitched tonight. He deserved a lot better fate.”

The loss dropped the Orioles a whopping 42 games under .500 (26-68), but Showalter appreciated the comeback.

“The baseball gods, so to speak, were not being kind to Kevin and the team,” the manager said. “Our guys said the heck with it and battled back and got within a run.”

Baltimore used some slick fielding to avoid falling behind in the second inning. After Scott Kingery hit a two-out double, third baseman Tim Beckham dived over the foul line to snare a grounder by Aaron Altherr, scrambled to his feet and threw out the runner.