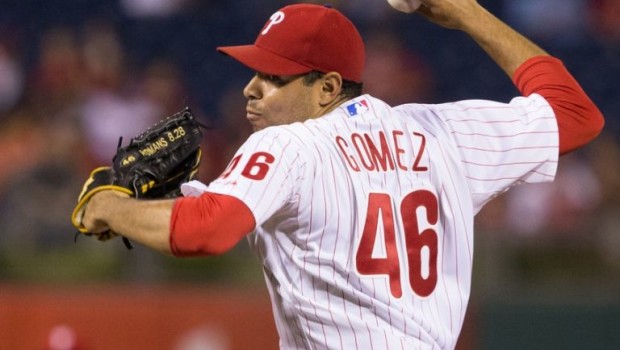 The Phillies didn’t need a closer in yesterday’s 10-6 loss to the Reds, but manager Pete Mackanin said afterward Jeanmar Gomez likely would have been the guy.

“We’re auditioning,” Mackanin said. “We’ve got to find out. It’s a daily question. Why not Gomez? Let’s see what he can do.”

The Phillies’ bullpen has a 12.91 ERA (11 earned runs in 7 2/3 innings) in three games this season. David Hernandez lost a lead in the eighth inning Monday. Dalier Hinojosa did the same in the ninth inning Wednesday.

Mackanin said Gomez did not respond well in those situations last season. But the Phillies are willing to try anything right now.

“He hasn’t told me he’s uncomfortable there,” Mackanin said.

Gomez saved his first and only game in 2014, when he pitched for the Pirates. He threw a clean inning.

“Any role, any inning they give me the opportunity to throw, I’ll be ready,” Gomez said. “No matter if it’s seven, eight or nine or six or four. It doesn’t matter. I don’t think too much about it.

“You know, I think every pitcher has the capacity to throw any inning. We’ve prepared in Spring Training to help the team win in any situation, any inning where the manager wants to put us. So I think all the bullpen has the capacity for that role.”

Of course, so far that has not been the case.