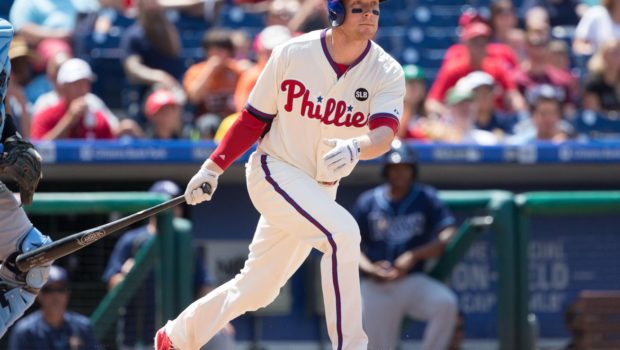 PHILLIES’ ASCHE — WHO? — NOTHING TO SNEEZE AT!

Cody Asche has been away from the Phillies for so long that when he was inserted into last night’s line-up a lot of people did “who’s that” double takes.

“I felt it every time I sneezed for two months,” he said about his oblique injury. “Once I could sneeze and didn’t feel anything I knew it was OK.”

That was about a month ago.

Asche injured his oblique — rib cage muscle — early in spring training. He made all the progressions to get back on the field, then hurt it again late in camp. That forced him to open the season on the disabled list. He completed a minor-league rehab assignment on Wednesday and was activated from the disabled list and thrown right into the big-league lineup, playing left field, last night.

Asche hit just .169 with a double and four homers in 15 minor-league games. He also struck out 19 times. But the Phillies entered Thursday averaging a major-league low 3.13 runs per game and starving for offense. So Asche gets a shot.

“I’m hoping he can add some offense to what we have,” manager Pete Mackanin said.

Mackanin doesn’t have a set plan for how he will rotate Asche into the lineup. He also has Tyler Goeddel, Peter Bourjos and Jimmy Paredes to consider as corner outfielders. Bascially, if Asche hits, he will play. That goes for anyone.

The need for more offense led Mackanin to sit Cesar Hernandez as the Phillies opened a four-game series with Milwaukee. Andres Blanco started at second base. Hernandez is hitting .250 with a .301 on-base percentage. Mackanin thinks Hernandez is capable of hitting .280.

If Hernandez doesn’t get going, Mackanin could take a look at the recently acquired Paredes at second, as well. Paredes, picked up from Toronto in a cash deal on Wednesday, started in right field on Thursday night and batted third.