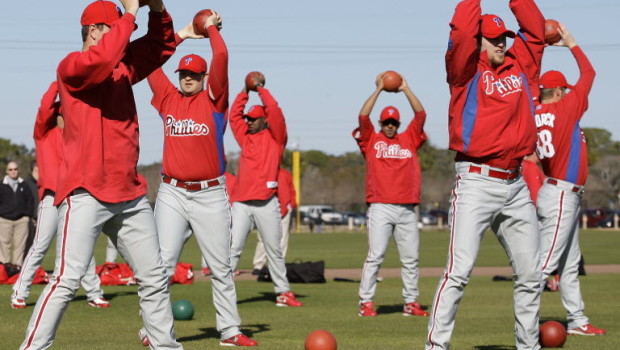 The Phillies loaded the truck yesterday for the 1,058-mile trek from Citizens Bank Park to Bright House Field in Clearwater, Fla., where pitchers and catchers will have their first workout on Thursday.

The truck is loaded with everything from uniforms and baseballs to golf clubs, the Phanatic’s infamous hot dog launcher and one canoe.

Of course, the process began much earlier than Friday. The Phillies’ clubhouse staff places orders for almost everything it will need in early December. Things begin arriving after New Year’s Day.

“We’ve never run out of anything,” manager of equipment and umpire services Dan O’Rourke said.

A few items on the truck include:

The clubhouse staff loaded everything on wooden pallets as the equipment came in, and beginning Friday, they took a pallet jack and moved everything to the service ramp inside the ballpark. The stadium operations staff then used a forklift to move the pallets to the truck. More than a dozen people were involved.

Marty Garland from Havertown, Pa., dictated how the truck was loaded. This is his eighth time driving the truck to Florida.

“He’ll say whether he wants tubs, bats, crates, suitcases, whatever. However he wants to build it,” O’Rourke said. “Before we started unloading at 8 o’clock, Marty and his guys will take a walk to see everything we have.”

The laundry list of things on the truck hasn’t changed much over the years, although there are fewer personal items on board this year. This Phillies team is much younger than ones in years past, which means fewer families — and the additional items that must be shipped that come with them.

The 53-foot truck will travel through eight states before pulling into Bright House Field tomorrow.