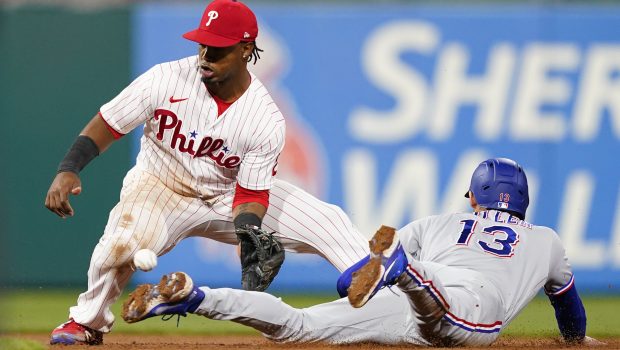 PHILLIES ARE MAKING THE TEXAS RANGERS LOOK LIKE THE YANKEES!

Marcus Semien doubled and had two hits for the Rangers, who have won a season-high four in a row after sweeping the two-game series with the Phillies.

Nick Castellanos doubled and had three hits for Phils, who have lost four of five since a four-game winning streak.

The Phils’ Zack Wheeler and the Rangers’ Martin Perez pitched lights out. Matt Bush (1-1) was given the win after getting the final out of the ninth.

It looked like the Phillies had gotten on the board in the sixth when Castellanos lined Perez’s first pitch to right. First-base umpire Erich Bacchus signaled that it was a home run, but the call was overturned after a video review showed a fan reached over the railing and touched the ball while it still was in play.

Castellanos went to second base instead after the double, but the inning ended when Bryce Harper followed with a flyout to left field.

“We just have some guys that aren’t really clicking the way I think they’re going to through the course of the season,” Philadelphia manager Joe Girardi said. “We have some guys struggling right now and we have to find a way out of it.”