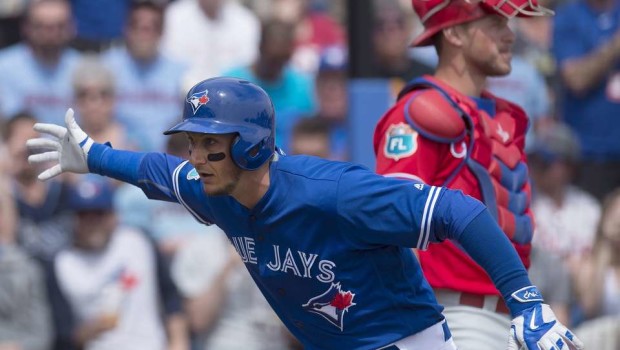 Michael Saunders hit a pair of home runs and Troy Tulowitzki in the Blue Jays’ 9-6 victory over the Phillies yesterday.

Saunders (above) hit a three-run shot in the first inning off Phils starter Aaron Nola and added a two-run shot in the third off reliever Elvis Araujo. Toronto’s veteran outfielder also added a single in the fifth to finish his day 3-for-3 with five RBIs.

Tulowitzki, who started the game out of the leadoff spot to get extra at-bats, recorded his first home run of the spring with a solo shot deep over the wall in left. It was his first hit of the spring, and he finished the afternoon 1-for-3. The other standout on offense included Chris Colabello, who went 2-for-3 with a pair of runs scored.

“I wasn’t really commanding the baseball. My pitches were pretty much over the plate, and they made me pay for them. I was getting behind in the count,” Nola said. “My first-pitch strikes [4 of 10] weren’t too good today.”

Catcher Logan Moore doubled in the fourth inning for Phils, and third baseman Taylor Featherston hit a solo shot in the fifth. The Phillies also added back-to-back two-out doubles in the ninth to bring the final score to 9-6. With the win, Toronto improved to 4-0-1 in the Grapefruit League season, while the Phillies dropped to 2-3-1.