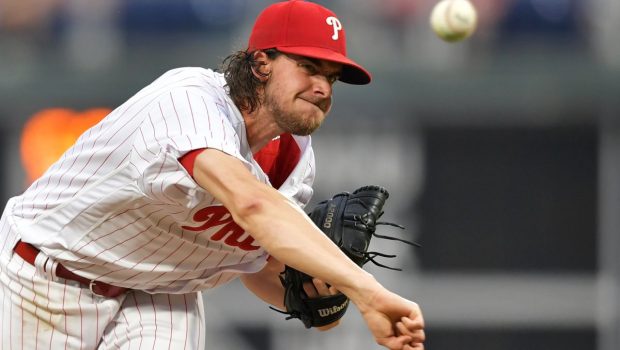 No, not the great pitcher himself, who won 511 games more than 100 years ago in MLB’s earliest seasons.

But the award named for Cy that is emblematic of the best pitcher in the National League.

Take last night against the Mets at CBP:

As the Phillies beat the New York Mets 4-2 before 40,460 fans at Citizens Bank Park. With the win, the Phillies (68-54) pulled to within a half-game of the first-place Atlanta Braves in the National League East.

Nola’s final pitch Friday was 79 mph curveball. Mets hitter Wilmer Flores swung and missed it by a foot for a strikeout to end the inning.​

Nola allowed three hits and a run in seven innings. He struck out 11 and walked one. It’s the fifth time this season, Nola has struck out 10 or more in a game. He has allowed two earned runs or less in 20 of his 24 starts. It’s those type of numbers that make Nola a contender for the National League Cy Young Award.

“There’s been a lot of Cy Young Award chatter,” Phillies manager Gabe Kapler said. “(Nola) rises to the occasion. He’s ready for the biggest moment. He likes the brightest spotlight.”

Nola threw the curveball on 35 of his 108 pitches. The Mets swung and missed at it 13 times. Hitters often flailed at the pitch as it broke out of the strike zone.

“I was throwing it harder,” Nola said of the curve. “My arm speed was better tonight. The command of it felt better than it has lately. I could throw it for strikes. I could throw it out of the zone and down with some depth. That’s why it was effective.”

The curve was dominant from the start. Nola struck out the side in the first inning, including Mets hitters Amed Rosario and Austin Jackson swinging at curveballs. The curve then carried Nola through the rest of the outing.

“His pulse is just very even,” Kapler said of Nola. “He’s so calm. He’s so prepared.”

When the Phillies drafted Nola, they projected him to be a middle of the rotation starter.

He is clearly more than that and his performance this season is a big reason why this year has a chance to result in the Phillies first post-season appearance since 2011.

What does Nola think of being mentioned with Max Scherzer of the Washington Nationals and Jacob deGrom of the Mets as Cy Young favorites?

Nola might be calm on the mound but the question flustered him a bit.

“To be talked about with the other two guys …,” Nola said. “Those guys are pretty good. I’m just trying to win for this team though. That’s everybody’s main goal to keep on winning and try to win our division.”