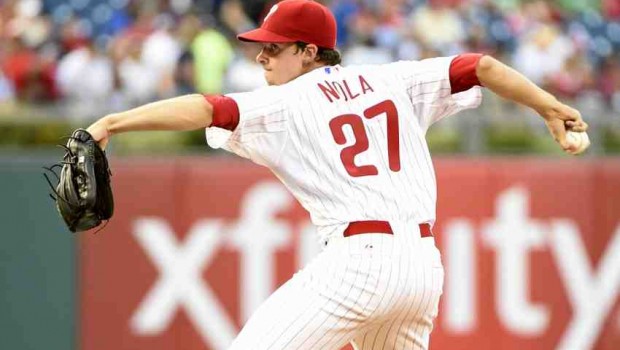 Phillies starter Aaron Nola has come a long way since he was drafted No. 1 two years ago.

“It’s all of our dreams to be an opening day starter if you haven’t been one,” Nola told MLB.com at Phillies camp.

The young right-hander is the favorite to start for the Phils on April 4 in Cincinnati, but don’t mistake his confidence for cockiness.

“Forming those relationships when I was up in Philly this past year definitely has helped me this spring training so far, and I feel it’s going to continue to help me.”

It also helps he earned the respect of his teammates by living up to all of the hype last season. Nola entered the big leagues and acted every bit the seventh overall pick of the 2014 Draft, going 6-2 with 68 strikeouts and 19 walks in 13 starts.

Nola wasn’t content with his debut, so this offseason he fine-tuned his repertoire.

Nola’s teammate, Jeremy Hellickson, can relate to building off a great major league debut. Hellickson was an American League Rookie of the Year Award winner with the Rays in 2011, and the new Phillies righty compares Nola’s stuff to his former Tampa Bay teammate, James Shields.

“I think he’s handling it great,” Hellickson said. “I don’t think much gets to him. He works extremely hard.”

Nola may be young, but he’s wise enough to know big league hitters will be ready to make adjustments this season.

“They put whatever I did to them into like a computer in their brain, and I try to do the same,” Nola said. “At the end of the day, it’s about making adjustments.”

Learning and adjusting? Check and check.

Nola seems to have all the bases covered.

“I put a lot of work into my change-up, trying to get my changeup where I want it to be, have it be a strong pitch in my arsenal this year.”